Band Room Freaks and Weirdos…Who Are You Sat Next To ?

If you have been playing for years you will have been next to many different players in the band room.  Unless of course you are ‘Billy no mates’ on timp’s.  It’s similar to sharing a hotel with a ‘roomie’ but for much longer.

I have sat with some right weirdos in my time and have concluded that there are several stereotypes.

First on the list is the most annoying…’The Fidget’. They cannot keep still – Twitching, fiddling with the stand, taking their valves apart for no apparent reason.  Ants in pants, waving at other players, talking when they should be silent…a veritable convulsion of sheer purgatory!

Second in the irritation stakes is the ‘Waiting to be praised’.  A sad individual that, like a dog, just needs a kind word or two.  This insecure player seeks…no…yearns positive titbits from the conductor and must have their ego constantly massaged.

The ‘part dodger’ is that sly individual that falsely exudes an air of technical brilliance.  The reality is a cold sweat when they see anything harder than a run of minims and their part dodging skills kick into overdrive.  A sudden need to visit the loo twenty bars before the difficult section arrives, a coughing fit, a mysterious and extremely important phone call are all wizard wheezed from the part dodgers almanack of avoidance. 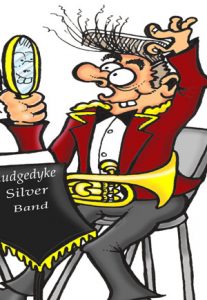 The ‘I, Me and Myself’ thinks and talks constantly about their favourite subject…themselves!  Attracted to the limelight like a self-centred moth. The only photos on their Facebook profile is of…yes, you’ve guessed it – themselves!  The Narcissus of the banding world are a nightmare to sit next to.

They need space…Gucci bags, phone, charger, mirrors, designer mutes, drinks, snacks and makeup bag.  Fake tan radiates like the centre of a Jaffa cake around the band room.  And woe betide you if they corner you in one of their one sided, self-glamorising conversations.  You know every last detail about them and they know or care zilch about you.

A quite likeable character is the ‘Don’t say much…but’ – one of the deceptive wallflowers of brass band stereotypes. Generally seen…but never heard…well almost never.  When they do exercise their vocal chords, they come out with something so profound it shocks you to the core!

There is another breed of band folk that are becoming more prevalent.  The ‘Rank of Incompetence’. This little beaut’ is soooo irritating.  Won’t leave parts out they can’t sniff, play your solos and mess it up when it’s marked for one!

This little creep usually has the knack of dispelling blame when the conductor glares your way.  A quick roll of their eyes in your direction and you are tarred with their abysmal brush.

There is a parasitic version of this little weasel that knows full well that they are useless but coat themselves with ingenious, un-sackable armour.  They do what no one else wants and become a high-ranking band committee member. Usually the Band Manager or Chairman.  Where better to call the shots and protect their rank of incompetence! 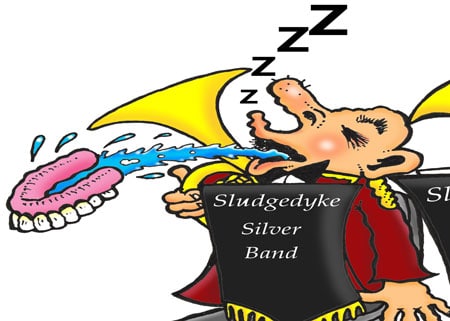 Most brass bands have a ‘Beyond the Grave’. That ancient, fossilised player that knows more players in the afterlife that the present.

They were conducted by the Mortimer’s and graced the stage of the Crystal Palace.

They can recall every National and Open winner from the turn of the last century but cannot remember how they got to the band-room.

Sitting next to them is fairly straightforward.  Just tell them what they couldn’t hear, point at what they cannot see and kick them when they nod off.

Last but not least is the ‘Silent but deadly’.  A mysterious being that sits without a sound.  Not so much as a ‘How-do’ or any kind of acknowledgement.  Are they just aloof?  Do they think you are rubbish? They are deathly silent and expressionless when not playing.  Static and unreadable. 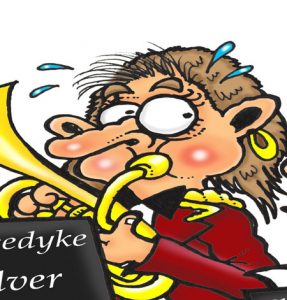 Absolutely un-nerving and can make even the very best player doubt they could play Indian Summer.

It takes months to break down their wall of silence.  They can also give you that look when you split a note – You know the one! The stare of death accompanied by a lingering, arched eyebrow!

Next rehearsal – take a real good look who you are sitting next to – it might be one of the above!

Caricatures by Nezzy Clean Up Your Act ! – What Lurks in the bowels of your brass instrument?