If you would like a detailed cartoon caricature prices start at £125 + £5 postage and packing for a standard full-colour cartoon which is supplied in a 12″ x 10″ mount with backing board + electronic version + a square jpeg version (for a Facebook profile picture if required). ‘Standard’ would be the person in uniform with their instrument.  Prices will vary if you require additional elements in the cartoon.

To do the caricature I will need:

I deliver the cartoons in a mount with the backing board as standard and is securely packaged and delivered first class recorded.

The price quoted will include postage and packing and recorded delivery (UK).

If the caricature is to be mailed abroad the overall charge will be greater due to greater postal charges which I would discuss before committing to a price. 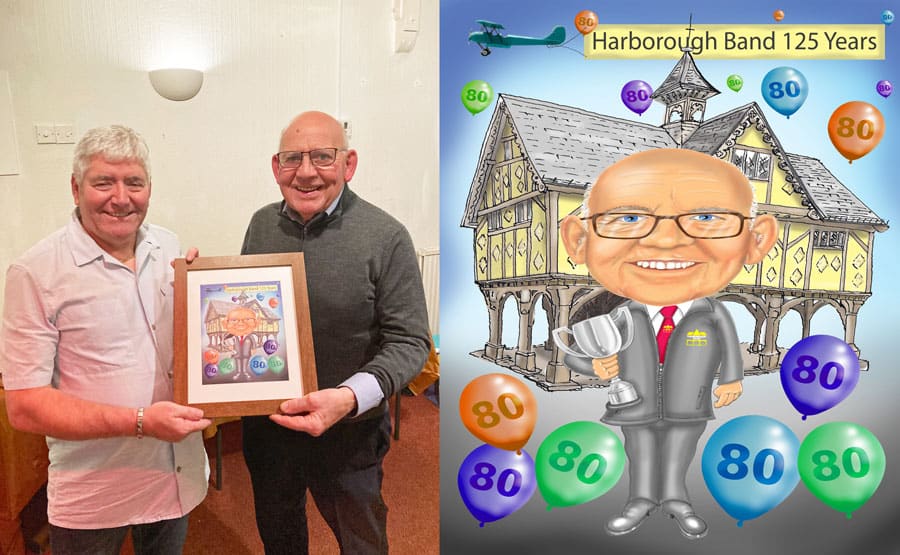 Caricature of Mark Stamp of the Harborough Band being presented to him by the bands chairman, Mick Hansmen.  Commissioned by the band for Marks 80th birthday.

This was a challenge as I was asked to feature the old school building in Market Harborough (which is also the bands logo) in the background, and feature the bands 125th anniversary which they celebrate this year. I really enjoyed drawing this – especially as I have distant memories of the old school house, as my father used to have a market stall in Market Harborough way back in the early 70’s. 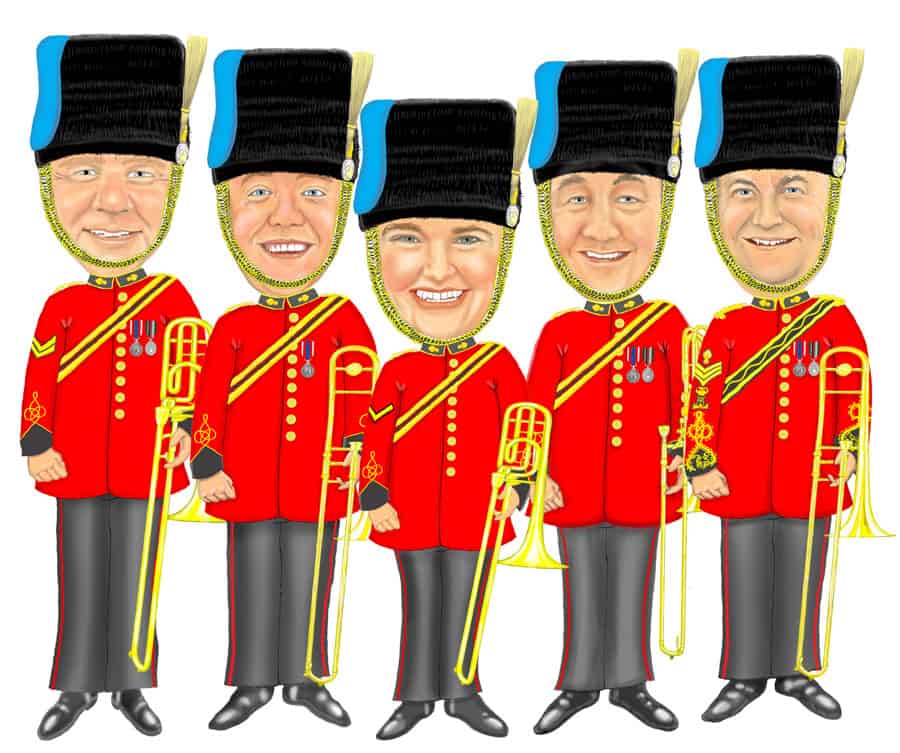 Elizabeth Pearce (‘front and centre’, as they say in the army) asked me to do this commission of her with her trombone section colleagues of the Nottinghamshire  Band  of the Royal Engineers.  It was a challenge as the uniforms are a lot more intricate that most brass bands but, one of the most enjoyable caricatures I have done to date… 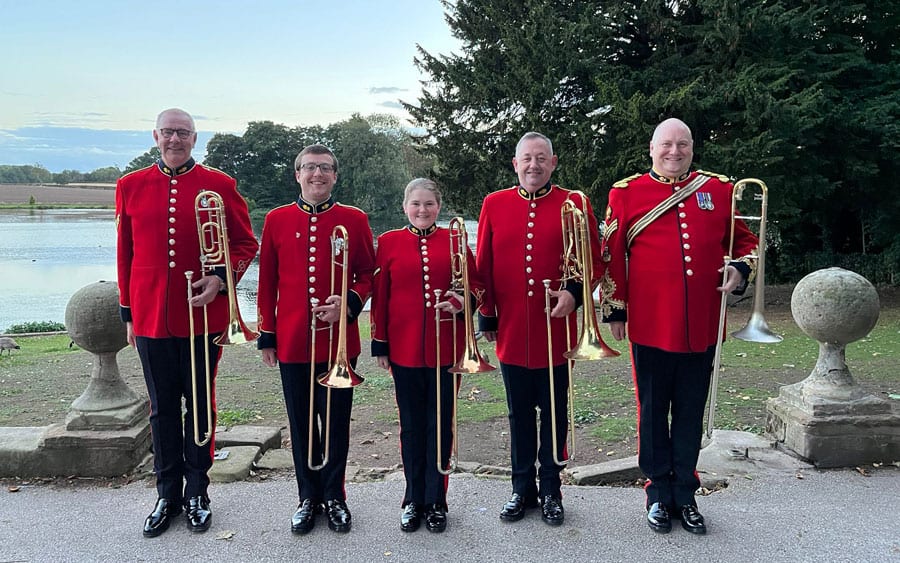 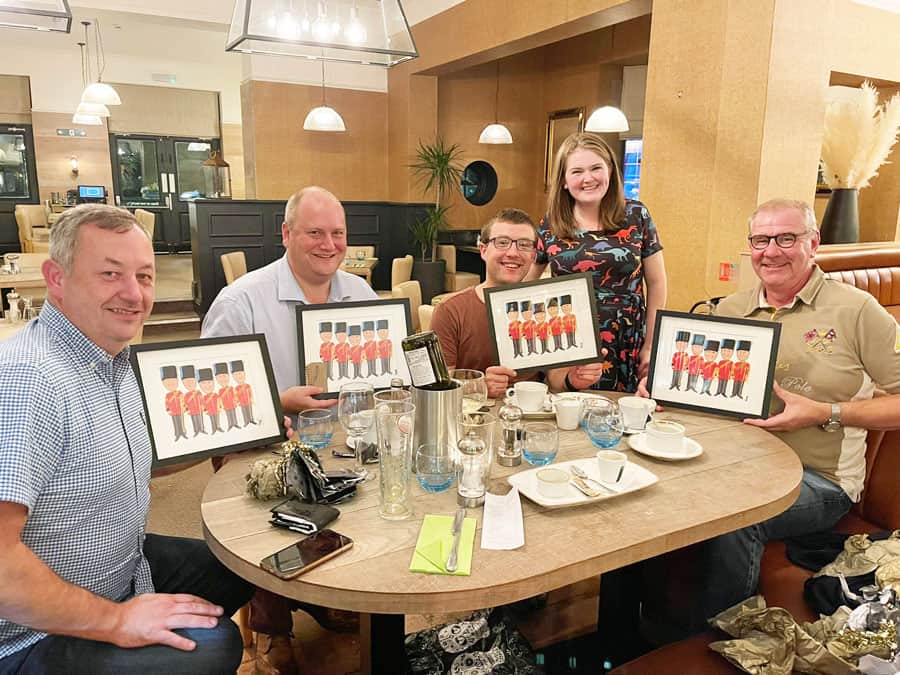 …Elizabeth, who  is leaving the band, wanted to give her colleagues something a bit different and memorable and I was delighted to help her do that. 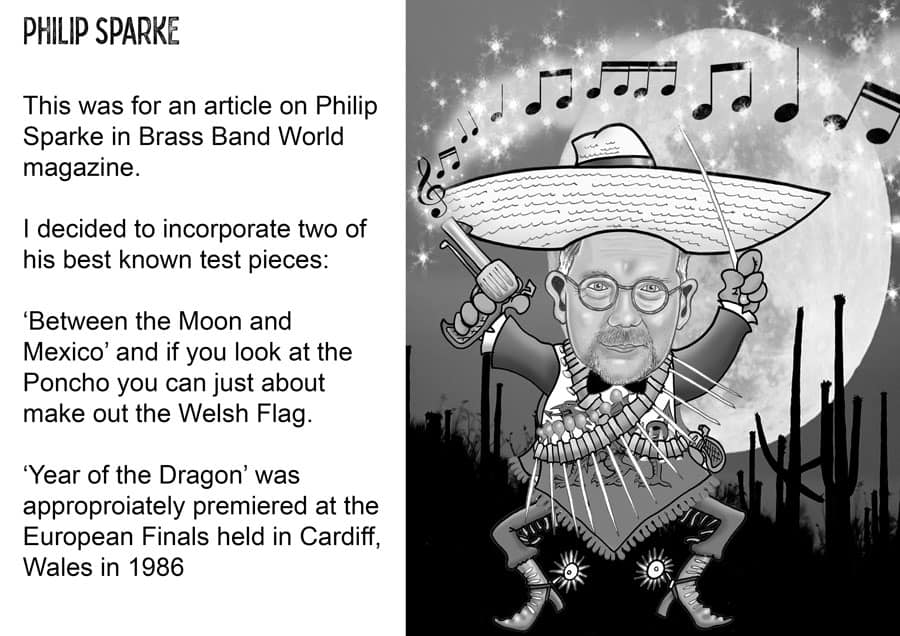 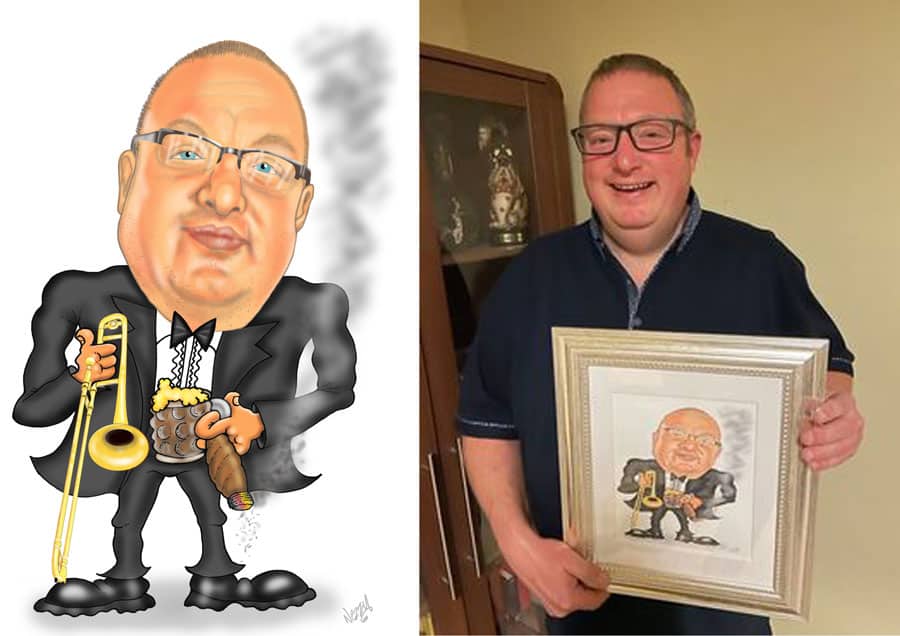 Phil Harper presenting Phil Harris with the caricature and details of all his successes with Cory Band over an amazing 40 years winning every major title. 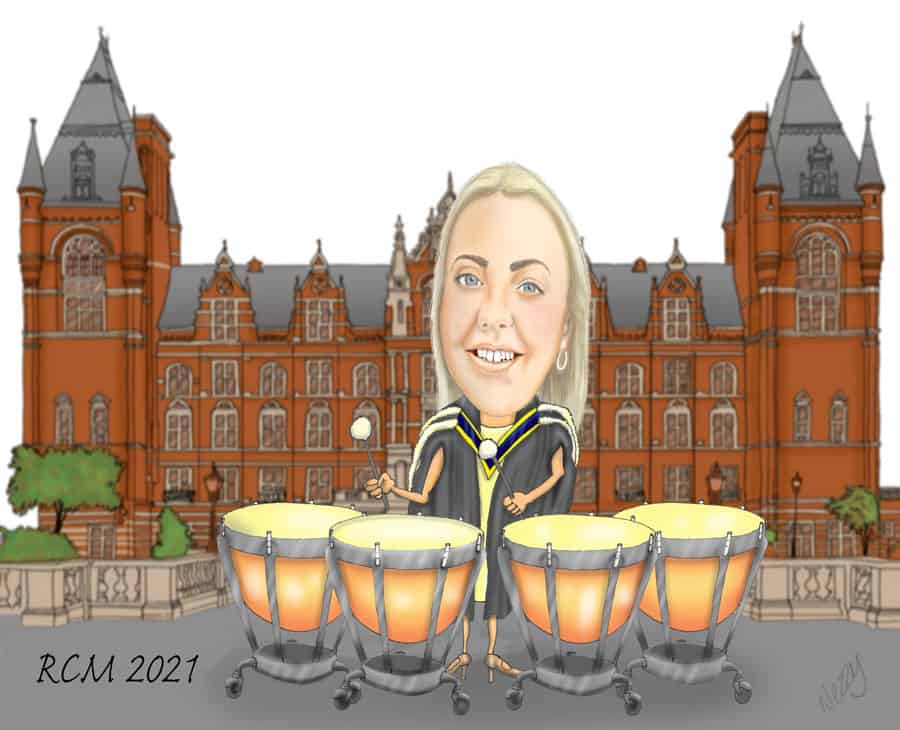 Heledd Gwynant – Caricatured outside the Royal Academy of Music, London after graduation – Nezzy caricature commissioned, by her parents. 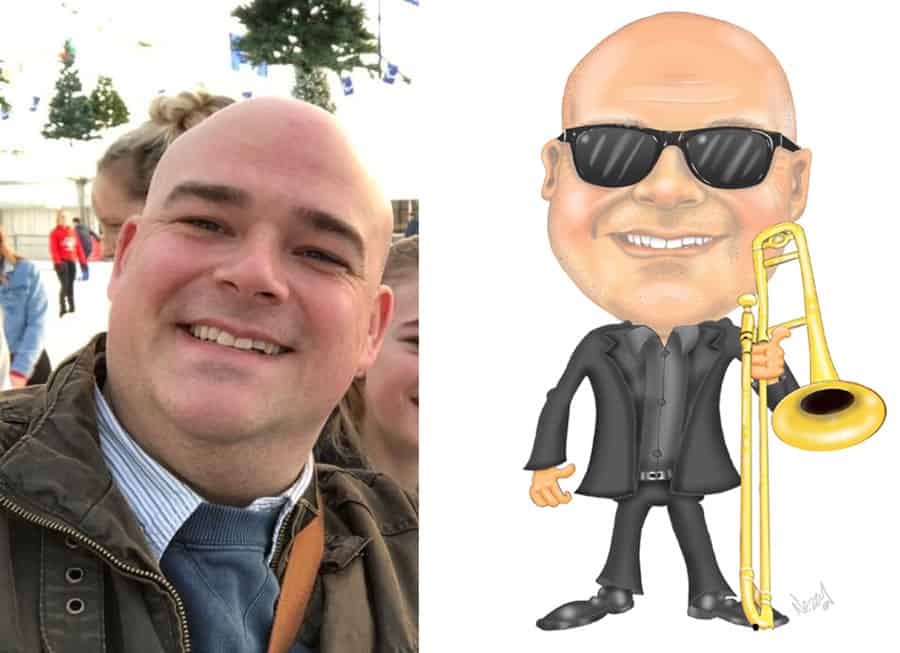 David Lockley on trombone with cool soul band shades! – Nezzy caricature commissioned, by his wife Sarah, for his birthday 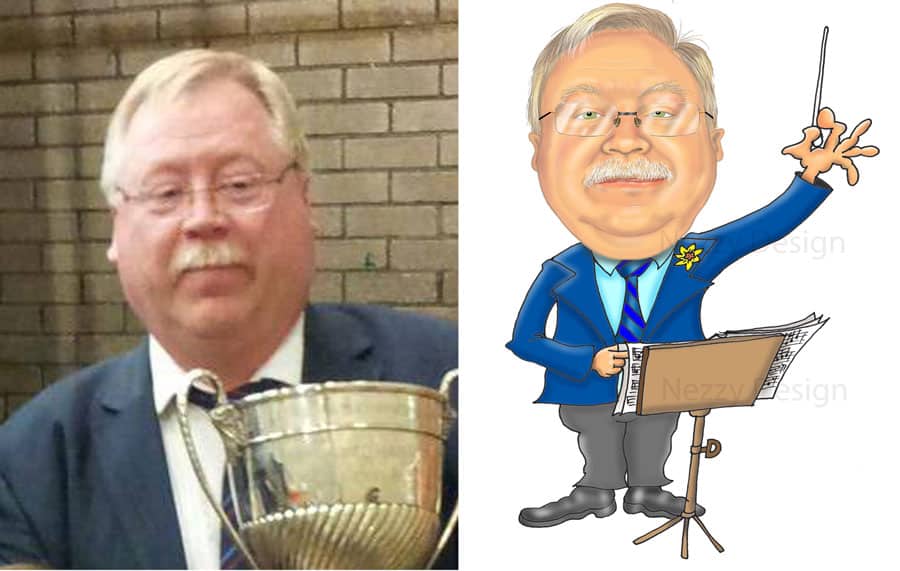 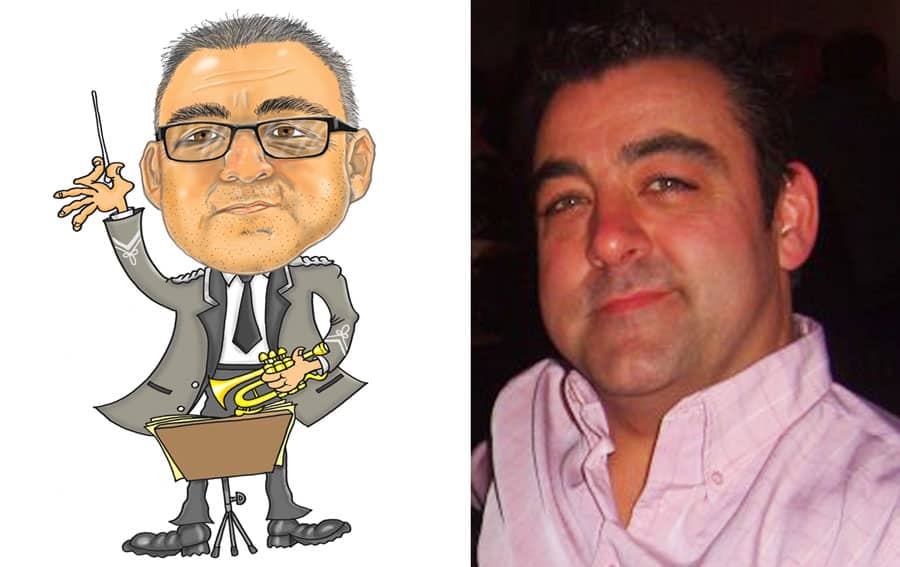 Jonathan waite – cornet and conductor, commissioned by his brother Ian 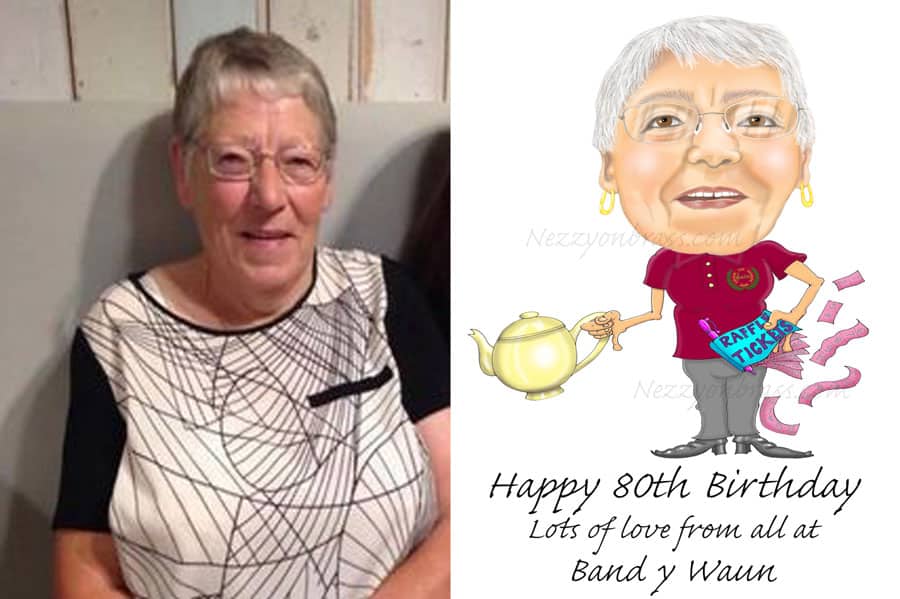 The most important member of Gwaun Cae Gurwen Brass Band! This lovely lady makes the tea and is never seen without a book of raffle tickets! Nezzy caricature commissioned by the band for her 80th Birthday 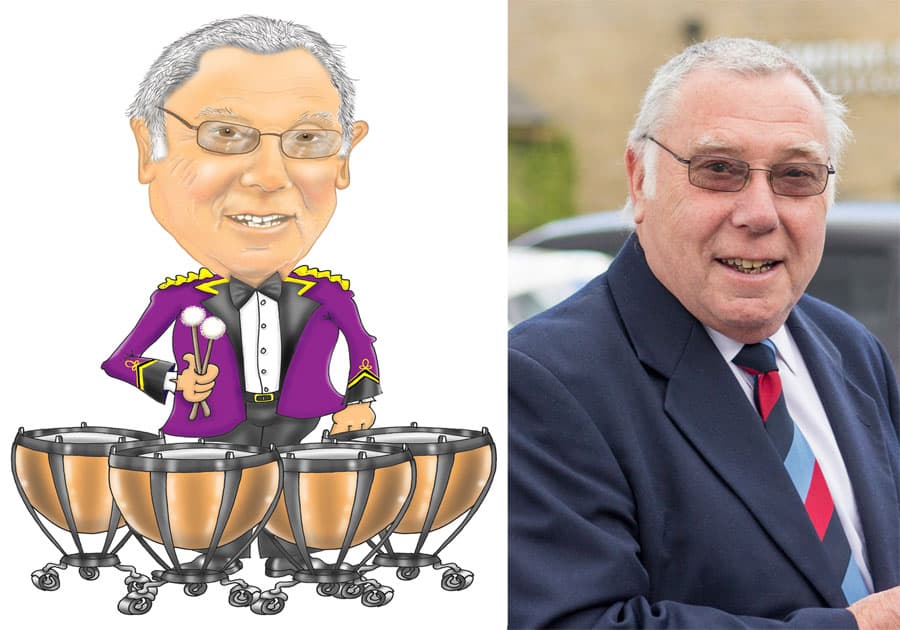 Terry McMylor – percissionist, commissioned as a gift for him by his daughter Janet Lewis 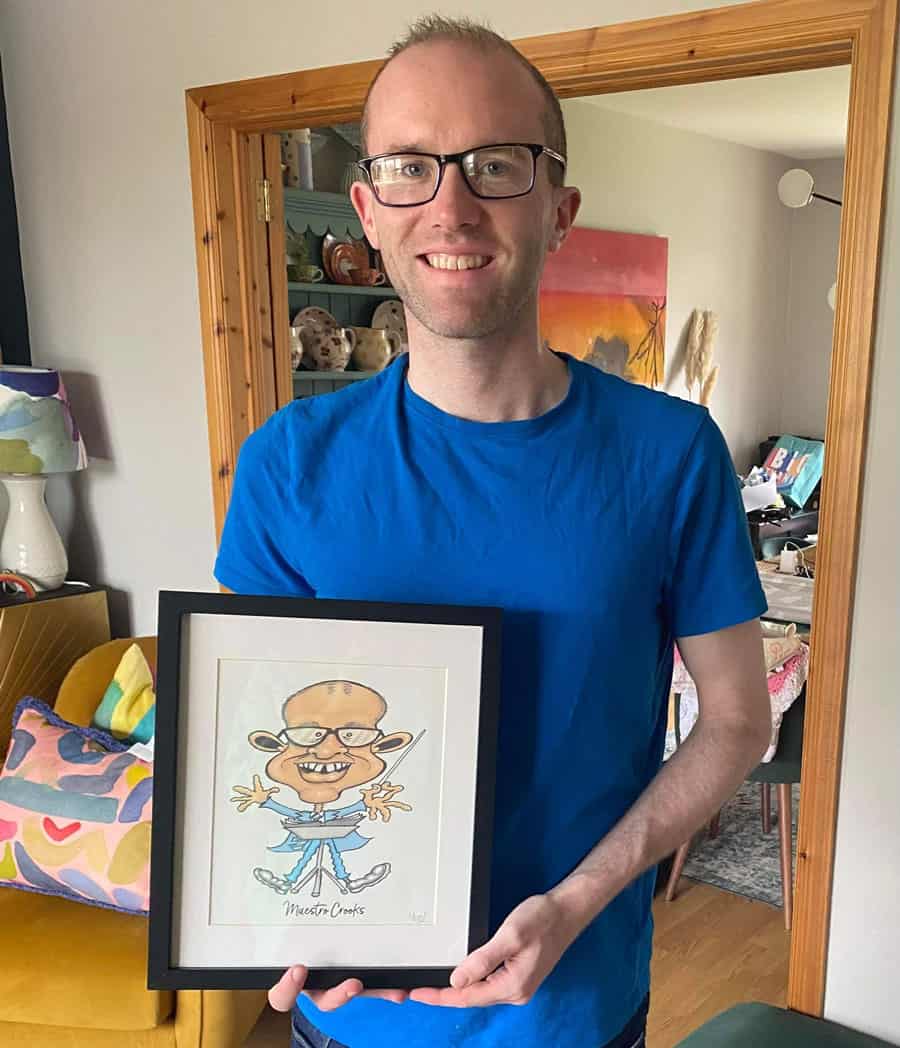 Stephen Crookes, who runs the Fermanagh and Tyrone Brass band Summer School,  with his caricature, presented to him after the tenth anniversary of the summer school. (Commissioned by Owen Farr).

Parting is Such Sweet Sorrow – What to Say When You Leave Your Band Band Room Freaks and Weirdos…Who Are You Sat Next To ?