Clean Up Your Act ! – What Lurks in the bowels of your brass instrument?

Summer…so there it was…Gone! And now it’s lips to the banding grindstone.  Busy, busy, busy with back to back Open and Nationals.  Did you bother to give your brass instrument an MOT over the summer?  Did you spend any time at all with your expensive mechanical masterpiece? Did you even look at the case? Thought not. 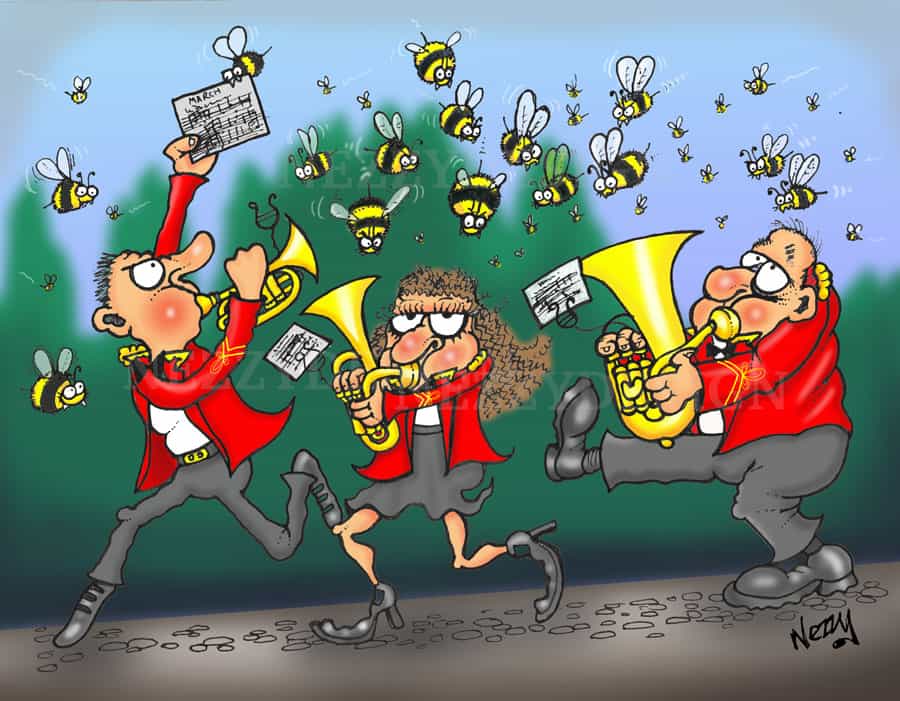 It isn’t rocket science to establish that if you blow into a metal pipe for long enough it will get furry on the inside.  Unspeakable things grow, evolving into a symphony of bacterial gunge that can make the instrument sound terrible, cease up valves and put you in hospital if you happen to breath in with mouthpiece on chops!

Every month I submerge the flugel in the bath for a couple of hours hanging a bio hazard notice on the door. 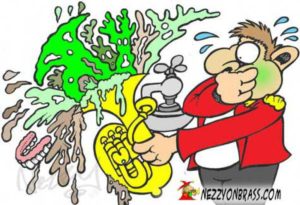 It still amazes me that some people given an instrument worth hundreds or thousands of pounds don’t do a thing to maintain it.  A cursory polish of the bell with their band jacket sleeve just before going on stage…if the mood should take them!  Don’t they realise there are things lurking around inside that even David Attenborough hasn’t heard of?  Years of festering yuk with the potential to make the Black Death look like mild hay fever.

Then there are those foreign bodies that get inside.  I remember one kid who sounded like a distant Viking conch wailing across the rolling mists of the North Sea.  No matter how hard the conductor tried he could not get the lad to blow louder or improve his sound quality.  It wasn’t until the boy left the band and a more proactive junior took over the same instrument that a tatty and exceedingly rancid Rupert the Bear toy was ejected from the bell end.

I have seen clothes pegs, music scores, knitting needles, marbles, bags of sweets and even teeth lodged inside instruments in my time.

Another true and horrific tale was at a band where a bass player and surrounding players kept complaining of a horrific stench in the band room.  This went on for a few rehearsals until the aforesaid player discovered that his cat had been caught short and used the inside of the bass bell! 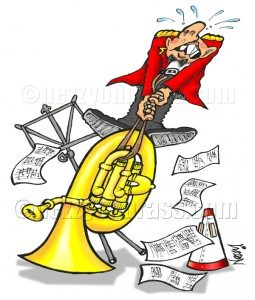 Enforced maintenance usually only happens when there is mechanical breakdown.  You know the score…” Bb Bass can you pull your main slide out a smidge?” Why does everyone else in the band smirk and turn round to gaze in morbid anticipation when this occurs?

After five minutes of grunting, sweating and swearing the red-faced culprit has to admit they couldn’t budge it.  “It appears to be stuck” Definition of ‘appears’ in this case is “Haven’t moved that slide in donkey’s years’ or ‘Didn’t realise it was a slide”.  Fixing the problem results in one of the following:

External influences can also play havoc.  I have been on a band march and been attacked by a swarm of bees who mistook the uniforms and shiny instruments for flowers!

Gone are the days when moths used to chew their way through a set of uniforms with gay abandon now that the world is overrun with plastic fibres.

But there are still other little critters that chew manuscript and can invade your instrument.  Never trust a brass instrument that has been left out for years on a high shelf.

You can bet your life it will harbour a plethora of eight legged beings both dead and alive.  The blood curdling scream of a player who finds a common house spider galloping out of their mouthpiece is a joy to behold.

So give your brass instrument a well-earned clean inside and out…if you are brave enough! 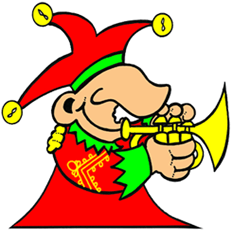 Band Room Freaks and Weirdos…Who Are You Sat Next To ? Brass Band Expert Percussion Workshops