What is a brass band? 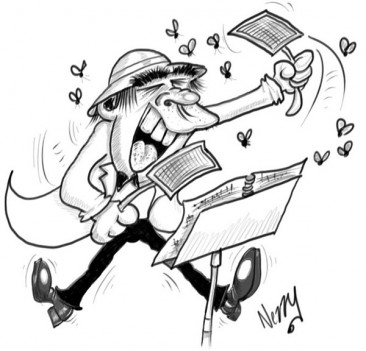 For those of you who have stumbled upon this web site and are wondering what is a Brass Band?, I will do my best to enlighten you and put in it layman’s terms.

A brass band consists of groups of brass instruments of various sizes and tones.  At the top and squeaky end is the smallest – the soprano cornet that can be heard sailing above the band; a lark on crystal meth –  and at the other end of the scale are the large growly things – the bass end that rumble; elephants’ bowels on the grassless savannah.

In between there’s the cornet section, with four on the front row playing the melody.  A  principal cornet performs the pretty, twiddly bits and usually  gets paid the most.

On the back cornet row is the repiano cornet which is a link instrument between the cornet engine room (2nd and 3rd cornets – the back row) and the front row.  The back row cornets play the lower harmonies and other bits and bobs. These essential players can normally blow like hell, have purple faces but go white at the sight of an ‘air varie’ (rock hard fumbly valvey music).

There are three trombones – slidey weird things with no valves i.e. all ears and guesswork.  Solo trombone which plays the tuney bits; 2nd trombone that plays the lower accompaniments; and the Tasmanian Devil of the band, the Bass trombone that roars and rips its way through the bass end of the band.

Euphoniums and baritones provide the main mid-tone of the band, and each of these sections has a leader (solo – who makes the most money of all on Solo CDs) with the tuney bits, and a 2nd who plays the accompaniment.

Last but not least are the horns which bridge and bind the lower end and cornets together.  Solo horn (tuney bits) plus 1st and 2nd horns create a three part harmony which puts the jam in the doughnut.

There is another horn – the flugel horn that looks like a pregnant cornet.  This links tenor horns to cornets and gets the best melodies in the band and is without doubt the best instrument in the world to play (why? – because I am biased!).

The non-brass section are those crazy people who play the sticky, beaty, bashy things – the percussionists.  There can be umpteen of them but normally a maximum of four.  They add the percussive sound effects to the band.  The sticky, beaty, bashy things can be straightforward drums, cymbals or tamtam (big gong –  a la J Arthur Rank) which are dead easy to play (hit and hope).

There are also tuned percussion (plinky plonkey department) such as the glockenspiel which consists of lumps of tin on a bench that make different sounds when you hit them with a stick, or a marimba which is the same sort of thing but with lumps of wood.

There is an additional member of the band that holds a thin wand and waves their arms frantically around like a mosquito hunter in a Rangoon swamp.  This is the conductor, Maestro or Musical Director, and the band are supposed to raise an eyebrow in their direction now and then to make sure they are ‘sort of in the right place’.

So that’s a Brass Band – 25 blowers, 2 whackers, 2 plonkers and a Burmese fly swatter.