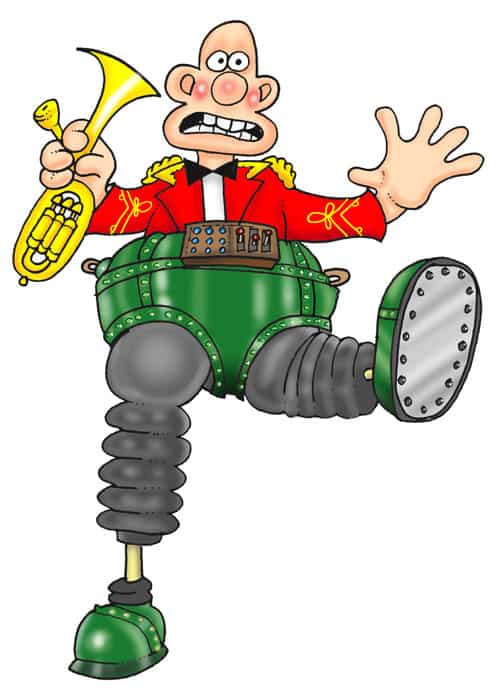 I have lost count of the number of times I have heard a stupid request just as the band are about to register.  “Has anyone got a small screwdriver or an elastic band?”  “Hang on – I’ll just check my shirt pocket…Nope…just a mole wrench and a Black and Decker WorkMate sorry.”

It makes you shudder that it’s come from the player with the biggest cadenza in the piece and their instrument is merrily falling apart, turning everyone in the band into gibbering wrecks. The other little beauty is the stuck valve on stage.

The valve in question has been gliding up and down in its valve casing a trillion times up to this point without a hitch.  Why now?  Why does the brass band gremlin decide to stitch you up right in the middle of a live performance?  Because it can!

The most common and frustrating is missing uniform.  I always carry a spare bow tie because you can bet a pound to a pinch of sharps that someone’s forgotten their own.  Jackets left in hotels shirts missing, brown shoes and white socks.

They even made an animated film based on brass band numpties…’ The Wrong Trousers.’ You can tell the absent-minded player as they walk red-faced on stage wearing the band managers straight jacket, ten sizes too small or no jacket at all and stand out like a bongo solo in Nimrod.

The worst has to be missing players!  “Has anyone seen the solo horn?” I recall a Pontins qualifier where that happened (are you old enough to remember frostbite without ten pence for the chalet electric meter?).

Brean Sands was the glorious setting with a certain band from South Wales, who shall remain anonymous (Burgundy jackets, winners of the Open twice, performed recently on-line with Matt Lucus).  As the band walked off stage, Lord Lucan reappeared from a shopping trip with his other half!

After a long-ago National Finals with the same band, one of the bass players went AWOL and we were getting quite worried.  Hadn’t been seen for hours.  Last seen in the bar. Glazed look, clutching two pints and band tie at half-mast.

Turns out he had fallen asleep in the loo in the Royal Albert Hall and had to be let out at 5 am by security! I have only been to one contest where the adjudicator was missing…how about that!  Good job the officials looked inside the empty tent before the first band went on stage.

Percussionists are usually very well organised…most of the time.  Imagine setting everything up.  Timps, kit, marimba and all those other weird wood and metal contraptions that the shed builders play with.

The whistle has been blown. The audience is hushed in anticipation. The maestro is about to lift the baton when suddenly the percussionists start to panic and wave frantically…the briefcase full of sticks is still in the changing room! (Seen that…got the Tee shirt).

Organisers and announcers sometimes pull out some shockers.  Wrong results being readout…I won’t go there! The best has to be some mispronunciations of test pieces.

“Band number one will play Petit suet de ballit” (written how it was said!).  Even better was this little gem. “The band on stage will now perform Beefovens Works.”  The announcer still didn’t get it when told after the event…fell on deaf ears just like the composer.

One of the funniest slips of the mind occurred at a marching contest.  There was a multitude of prizes to be given out…best cornets…best euphoniums…deportment etc. etc. etc…….. The organisers forgot to tell the adjudicator there was a prize for best side drummer.

A huge problem as some bands had one and quite a few didn’t.  Frantically scanning his own personal notes and every written adjudication there was only one single reference to a side drummer that the adjudicator could find, which read…Flippin’ dreadful side drum (or much more explicit words to that effect!!!). There was only one option. Yes… you’ve guessed it – that side drummer got the prize.

What’s the common thread?  An easy one that – nerves, anxiety with a huge dose of sheer stupidity…Nevertheless – after this long band-less lockdown I would truly welcome a blunder or two! 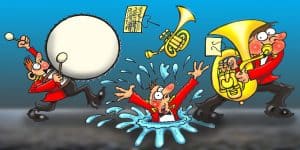 Should it be classified as a dangerous sport?