Marching – Should it be Classified as a Dangerous Sport?

With the recent Armistice Day marching events that most brass bands have some involvement with it got me thinking. 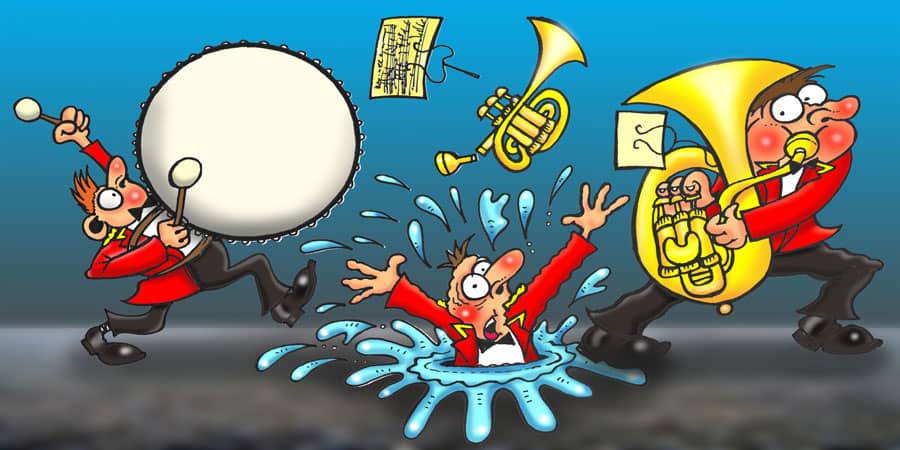 ‘Old Comrades’, ‘Scipio’ or ‘Sons of the Brave’ in the comfort of the band room is one thing but marching and playing – it’s a death-defying feat!  A heart rate of 60 – 80 bpm while stationary allows you to breath normally and blow through a march with relative ease.

Marching is bad for your health!

Marching uphill and down dale, while playing in full regalia, strapped to hefty Bb Bass quadruples your old tickers ticking and a heart attack is just a semiquaver away.  Your average Tuba player, who may have a waistline like a coastline, fed from the local chippy with an exercise regime that involves pushing the buttons on the telly remote and lifting a pint or two of diet lard is not the best candidate for the job.

It’s like asking Mo Farah to do the London Marathon and blow up balloons all the way around in under 2 hours.

Even when the band is fit enough there are other issues.  Some players can’t march – fact!  You would think that a musician who has to follow a bass drum beat to play in time with the rest would be able to put their legs in the correct order…but no.

There are some prize pilchards that are musically competent only from the waist up and look like Michael Flatly with two dead legs from the waist down – its simply staggering – literally!

“By the right…quick march!” has no meaning to these uncoordinated, dysfunctional beings who flail themselves through some of Sousa’s finest.

Talking of the bass drum it amazes me that the band usually get the oldest midget they can find then strap a massive drum to their chest which makes them oblivious to anything ahead.  No periscope, inverted wing mirrors or sat’ nav’ – in a world of their own.  They just stumble along blindly hoping that the two cornet outriders in their peripheral vision have some idea of the topography ahead.

The great British highways are specially designed to break ankles with an unseen pothole here or a patch of ice there which can easily fell the blind drummer.

Percussion manufacturers take heed – perhaps a toughened glass, see-through drum or a drum that is back strapped where the drum beats are on the reverse swing (yes I am an inventive genius!).

Then there is that deadliest of hazards…the dropped part.  A cornet player can get away with a quick skip and retrieval.  A larger instrument with a less than nimble owner can result in what the police call an R.T.C. or in our case B.T.C. – Band Total Carnage.

I once witnessed a  player try to grab the baritone part of ‘Boys of the Old Brigade’ off the tarmac only to have a size 9 hoof from the horn player behind sending them sprawling.  Several players fell over the fallen before there was the mother of all pile-ups and the band came to a grinding halt – most in a heap! 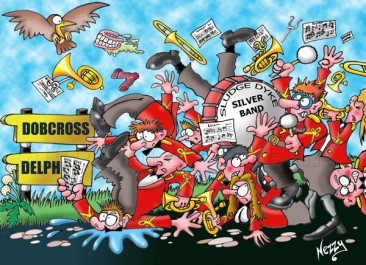 The road surface can also play havoc in other ways.  I marched behind 500 horse-drawn carnival floats in Ravensburg, Southern Germany many years ago.

Well, foddered horses leave an unwelcome trail behind and after marching behind such a large number of these equine engines for several miles and despite the band dodging the fallout, players began to grow.

At the end of the march, I had grown a good 6 inches on my freshly coated platform shoes.

Just to add insult to injury swarms of horse flies of a particularly vicious variety savaged every member of the band to within an inch of their lives! 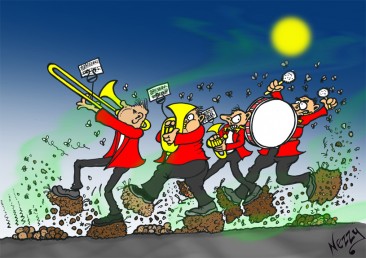 The weather often sticks the boot in and November is that special time of year when it rains so hard it can make your head bleed.

There is nothing so cheery as marching against the remnants of some far off hurricane as it stings your eyes, freezes your ears and dissolves notes.

Marching is one of those masochistic facets of brass banding that everyone moans about but has to be done.

If you have never experienced the pleasures of hypothermia, hyperventilation and trying to play semiquavers with one foot in a pothole you really don’t know what you are missing! 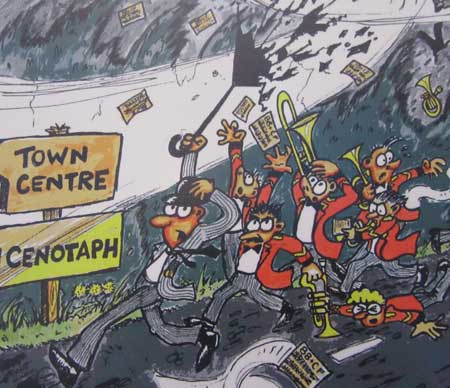 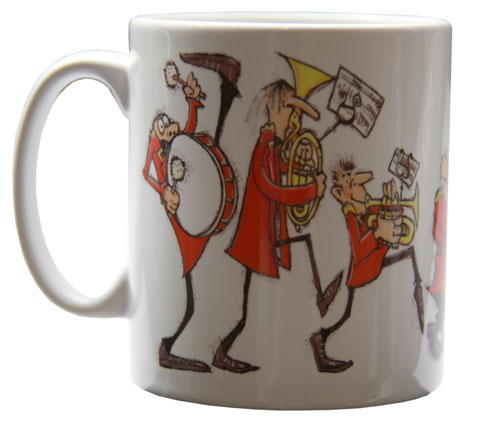