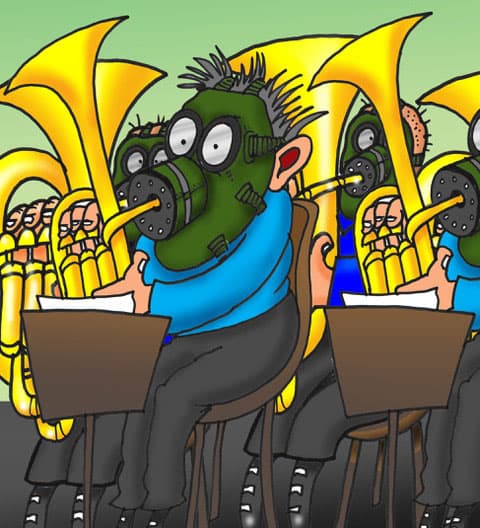 Everybody is utterly bored with the fake news.  If it’s not Covid-19, its clueless politicians or football matches with fake crowds.  Not a brass band in sight – except for those lucky Manx people who are, apparently plague free, and virtual brass banding knitted together like a musical sock.  So, what have we learned from this awful pandemic?

I have noted that playing with headphones and recording yourself playing the 2nd cornet part of ‘Bring Me Sunshine’, arranged by our maestro, is scarier and weirder than being sat on the stage in the Albert Hall!

Our conductor Christopher Bond, that well-known composer and Cornish pasty tester, unleashed City of Cardiff M1 into the ethernet!

I set up my individual recording.  Mobile phone, music stand, headphones and chair… easy peasy right? … wrong!  As I reached the last note of the first attempt my wife walked into the kitchen where I was recording.

Take two… Halfway through a council gulley sucker parks outside and started doing its worst. You know, the one that sounds like an elephant drinking custard.

Take three… my plunger mute falls out and clatters across the kitchen floor.

Take four… the doorbell goes just before the last note… the lady who delivers parcels gives her take on lockdown for half an hour.

A cup of tea later I sit for take five and get all the way through, sounding pretty good. Result! Until I notice I hadn’t pressed the record button.

Take six… I mess up with a quick mute change… 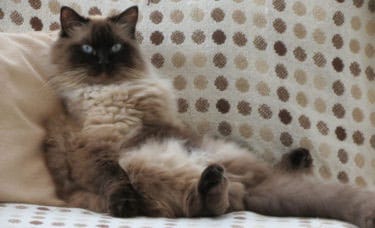 Take seven… I get halfway through and Oscar, our rag-doll cat, can’t get to his food and starts hollering and scratching at the kitchen door.  I swear at the cat and curse virtual brass banding.

Eventually, I succeed at take eleven.

But that’s not the end of it!  A technological genius, I am not and cannot get the recorded video file from my phone to laptop. My teenage son comes to the rescue.  It’s emailed to Mr Bond at Pasty HQ, Cornwall, to be welded together with the rest of the band’s recordings.  I collapse in a heap to recover with my cat, now fit to burst, on my lap.

And another thing… do we really have to wear those new-fangled bell end caps on our instruments? I haven’t had a cover on my bell end since I had to play a disguised flugel solo at the beginning of Le Roi D’ys on cornet.

What’s next? A spittoon for each player or a mute attached to an extraction system venting through the band room roof? If we can’t get rid of the excess water in instruments safely, what about a drencher system to wash it all away… If it was good enough for Gene Kelly to sing in!  The only way I can see rehearsals, contests and concerts returning are for players to be enclosed in a gas mask with an inbuilt mouthpiece!

If pseudo crowds are good enough for football, why not bands? It would also be a chance to test out crowd ‘clapometer’ theories.  How about complete silence at the end of top-rated bands performances and on the flip side a standing ovation for Upper Ribble Soap and Cheese Works Band?

What about park jobs – why not?  Just because there is a Victorian Bandstand in the middle of the park, where social distancing is impossible, it doesn’t mean we can’t!  Parks usually have fabulous features such as wide sweeping lawns, flowerbeds and majestic trees.

The conductor uses the bandstand and directs…

“Basses can you drop down two branches where I can see you… Percussion, louder please you are being muffled by the Dahlias and for goodness’ sake horns don’t put your mutes down until the gentleman has picked up what his dog just left behind… After four…”

Everyone is moaning that they can’t do jobs without rehearsals – do it in sectionals for now.  Can’t get to a venue as buses are not big enough? Hire two! Look at all the band con’s that have been mounting up since lockdown. Bands must be minted!  In a couple of years, we will look back at 2020 with fondness – the biggest non-event in brass banding history!