10 reasons to hang up your instrument

It is an inevitable truth that at some point in your brass career you will have to stop playing.  But when will you know when that time has come? Here are ten indicators that should give you a subtle hint… 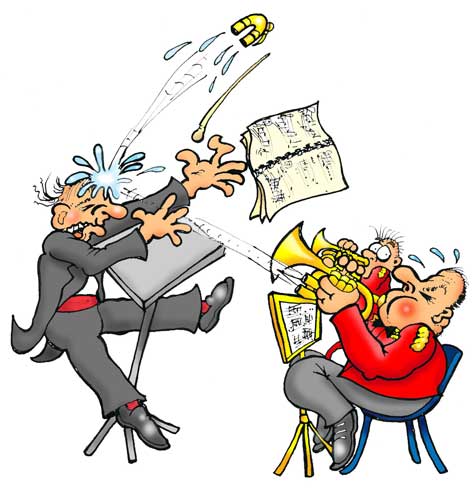 While the conductor is tuning the band he is forever telling you to pull the slide in or out and regardless of what you do you are always out of tune.

This means your ears are either on the blink or your lip has had it…or both!  You will know when this happens as the slides will wear out and constantly fly round the band room every time you manage to hit FFF!

Your dominant other half tells you to finish playing

Some players get bullied by their husbands/ wives/ girlfriends/ boyfriends to finish banding for their own selfish reasons.

‘Buggles’ (non brass players) do not understand the supernatural and magic world of brass playing.  Just remember what Hagrid said…“Harry you’re a wizard on the cornet.  Don’t take no notice of them Buggles” (or something like that!).

So what! if your kids have never seen you on a weekend.

So what! if you won’t buy a caravan because it would mean missing a rehearsal.

So what! if you are never seen just before Christmas (carolling)

So What! If Whitsun means marching…not a family holiday!

So what! if you are away from home 14 nights before every band contest and commandeer the car.

Those darn’ buggles just don’t have a clue and sometimes when their bullying becomes unbearable you may have to quit! 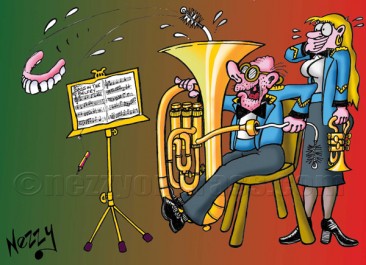 Your teeth have parted company with your gums

Even the best dentist on earth will struggle to save every tooth in your head.  If you are not in the earnings bracket of implants then some of us ageing brass players will eventually succomb to false teeth, bridgework and general major reconstruction.

You can spot them a mile off grinning like a shot fox with a mouth full of psudo enamel that can be seen from the international space station.  You know that grin.  Perfect teeth in a shipwrecked face!

This can have massive implications for any player as it will usually affect the embouchure.  In some cases it can see your career come to a sad toothless end..all gums and no toot!   So look after those gnashers and prolong your career.  There is nothing worse that a top set of falsies clattering accross the stage! 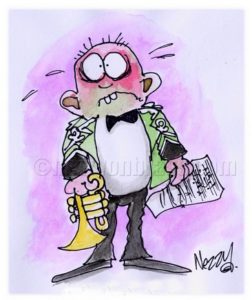 Your beta blocker supply has dried up

Years ago it was ‘alleged’ that some players were taking illegal substances to stop them shaking on stage like a dog doing it’s business.  (N.B. ‘Alleged’ in the banding world usually has the same meaning as in the political world!!!)  How ridiculous is that! – could you imagine conductors forcing their players to take performance enhancing drugs…couldn’t possibly be true in banding…could it?

If a player has carried on with this ‘alleged’ edge over us mere quaking mortals and the supply runs out – then it is odds on that they will have to stop or be found out. If you see a player that is as calm as a cucumber at one contest and shaking like a shaved polar bear at the next their beta blocker pusher has probably been taken down by the feds. 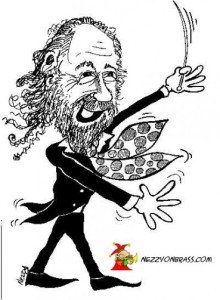 You have achieved everything

You have played in and won the Grand Shield, British Opens, Nationals at the Royal Albert Hall, Pontins, Butlins, Every Whit Friday venue,the French open, Bugle, Siddis, Brass in Concert, Dudley Zoo (remember that little beauty?) listen to the band with Roy and Frank and made at least 50 CD’s…done it…played it..won it…got the tee shirt.

So what could there possibly be left  in banding to keep you from retiring?…answer…do it all again with a stick in your hand!!! 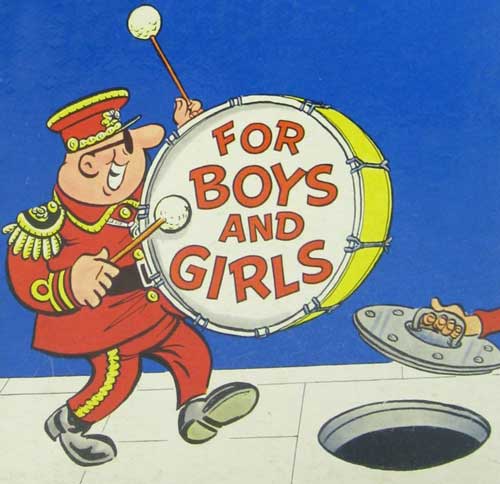 Your eyes are like stars…they come out at night!

This comes to most of us as the years roll by…You can’t see the notes on the part or maybe the conductor or both. Notes start to blur…. St Clement looks like the last movement of Sparkies Dragon. Your conductor is somewhere over there, arms like a humming bird and only re-appears in focus when you screw your face up with the most painful of squints.

You are playing Russian Roullette with the key signature, guessing rests and making up the rest. Extra large print, airvarie focals and extendable lyres.

You have gone from perfect 20/20 vision to  Colonel Blink in the blinking of an eye! If you are not an old fossil like me you won’t remember the Beezer Comic.  Colonel Blink was a character who used to wear milk bottle bottom glasses and was …as they say these days… visually challenged to say the least…i.e. blind as a bat!

You will know when its time to hang up your band jacket when that person you have been talking to for the last 10 minutes is the band room coat stand, you have been playing you part upside down and you can’t find a mute even when its in your face. 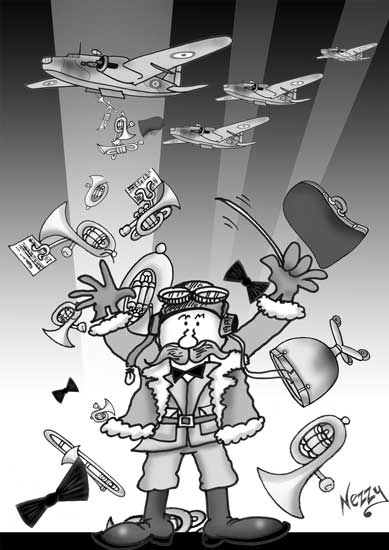 Vibrato that would have been useful for an approaching air raid

For brass players this is  a weird penomenon that comes with age.  Most players slowly but surely develop a horrific wider vib’ over the years.  They just can’t keep to the note and waver between a semi tone above and below.

I noticed this strange affliction back in the late nineties when I returned for one contest with Tredegar after a year or two off.  I was meanderding to the extent that Iwan Fox (4 Bars Rest) on Sop’ apologised to the then conductor Phil Bailey (who had noticed my wide vibrato) ‘You’ll have to forgive him – poor dab – he’s knocking on a bit!’  It took a couple of weeks to fix the worrying wobble and now it’s a constant battle.

If you are in this predicament, with molto air raid siren syndrome either bow out gracefully or move onto percussion!

After pulling on your slippers and a nice cup of cocoa your top eyelids head south and by nine o’clock you are snoring like a pig – which is fine in the comfort of your own home.  But what happens when you get the same situation in band?

You are on stage at a sweaty concert. It’s fast approaching ten o’clock because the male voice choir you are sharing the stage with have just taken their fourth unwanted encore.  It’s way past the witching hour for your old bones and those eyelids are doing a number on you again.

Only you notice the first nod…then everyone in your section start to point and snigger as you nod and slump forward just waking up just before you hit the stand.  After two minutes of this  the audience are pointing and the conductor’s eyes are burning a hole in you.  When you get to this stage its time to quit and swap cornet for pyjamas.

Remember the days when all you wanted to do is win the National, Open and every other title?  You would risk life, limb, job, divorce and bust a gut to get to every rehearsal, relishing every minute. Banding was your life and more!

You know when its time to pack up your stand and case  when all those burning desires have been doused by years of not quite being in the frame…boring rehearsals…number one draws…empty seats… and repetetive beer stain injury to cloth and liver.  You know every hymn tune off by heart – you even know which number has which name

When you have been around that long and seen the same test pieces re-used so many times you start to twitch, froth at the mouth and reach for the razor blades!

Your medical box is bigger than your instrument case 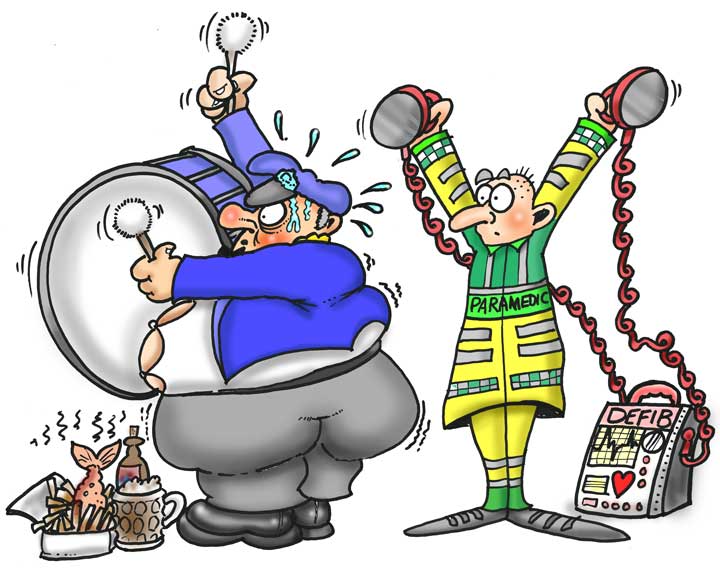 Over the years you have developed several medical ailments that require a veritable cornucopia of pills, lotions, gadgets and aids.

A lifetime of celebrating and commiseration at the bar requires gout pills and a support for pint lifters wrist.

Years of after contest currys, burgers, chips and Kebabs all washed down with a pint of diet lard – three pills for the cholesterol and a dozen Rennies for good measure.

Back ache from bandroom chairs with the comfort of a butchers block, bending for mutes, after stage self inflicted obesity, standing for hours in the Queens Mews and marching through pothole infested streets have wrecked the old lumber region.  Back support brace, gallon of ‘Deep Heat’ and boxes of Ibuprofen.

Your old ticker has taken a beating over the decades – waiting for results, Royal Albert Hall bar price shock, stand up solos, test pieces with horrific cadenzas, bullying conductors and pre-stage nerves. Half a dozen pills at least for the ticker and a couple for the blood pressure.

You finger joints have worn out from a zillion semi quavers, trills and awkward instrument gripping. That’ll be a box of joint supplements to put them right.

Your ears are shot as that noisy sod behind playing bass trom has blasted your lugholes into submission.  Hearing aid and spare batteries.

Half a dozen pairs of glasses and contact lenses for every conceivable optical occasion.

Lip balm for dry crusty chops (although a smattering of budweiser is equally effective) and ‘Arnica cream’ for bruised lips (blast from the past…does it really work???).

Spare teeth and Polygrip to stop those gnashers from clattering accross the stage.

Cream and ointment for those unmentionable volcanic ailments at the rear end….straining to reach those high notes for so long had to manifest itself somewhere and sitting in damp bandstand chairs hasn’t helped the cause…Ooooh Nasty!!!

When you are using most of the above it may be time to think about jacking band or buying a bigger case! 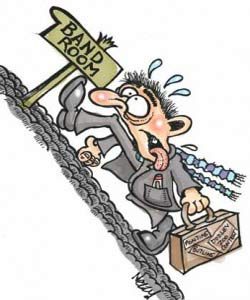 Think you are too old to go back to banding?…[more…]