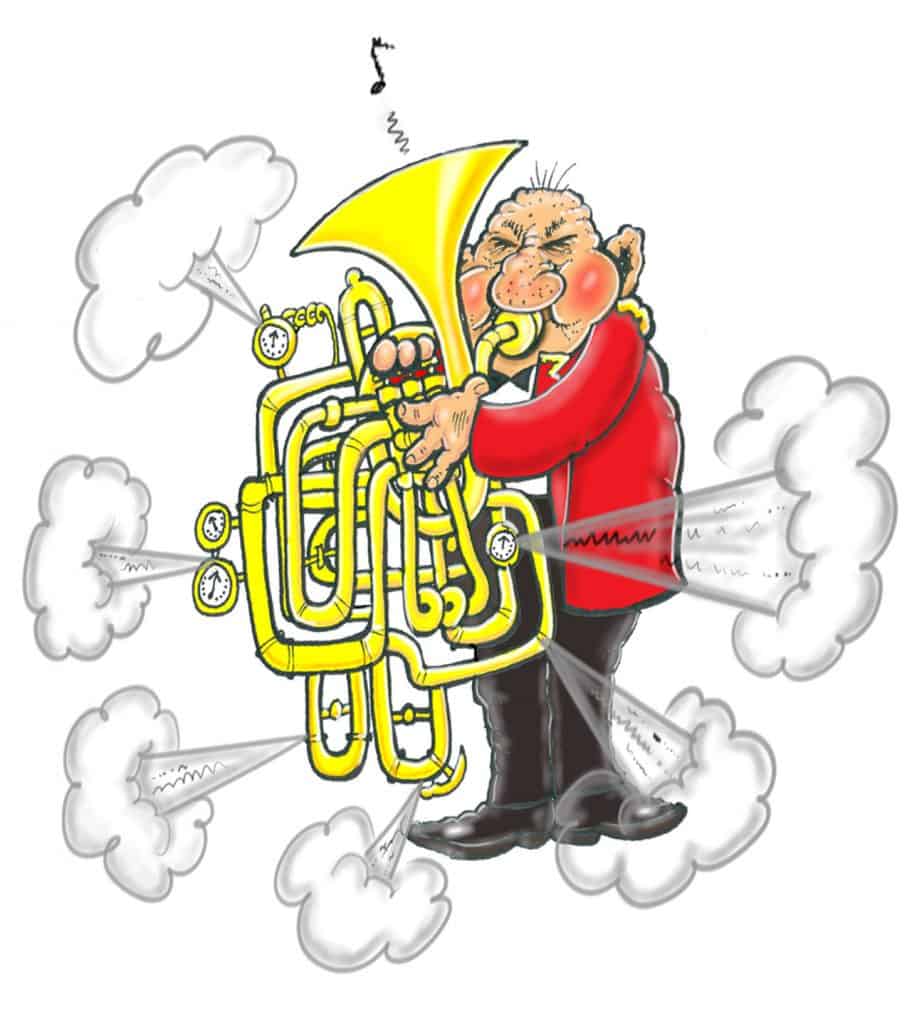 Brass bands invest a ridiculous amount of money to buy and maintain a set of instruments which should be revered, pampered and treated like the Crown Jewels. Alas there are some mechanical freaks who treat these magnificent contraptions with utter contempt.

You can forgive very young learners to a certain extent and excuse the odd emergency valve trigger repairs with elastic bands. However, there are seasoned brass banders who do things with instruments that they would never do to say…their car.

Many never think to brush out the insides or polish the outsides of their precious musical tools.   Is it any wonder why instruments break down often 10 minutes before a contest or look like they have dragged across a freshly ploughed field?

Worse still are those who consider themselves to be experts in self-repair and adapting mouthpieces and brass instruments.  You know the ones – awful players, have an almanac of excuses and revert to decoy tactics by making alterations and changing umpteen mouthpieces.

One such ‘expert’ (definition of expert: X = an unknown quantity SPURT = a drip under pressure) had the habit of coming to band, sounding like a distant wolf with laryngitis and then announcing it was the mouthpiece’s fault.  Next rehearsal the wolf would howl in the same manner and with the added bonus of being totally out of tune.  This horrific call of the wild was due to the mouthpiece being drilled out to make it deeper and wider with no scientific rationale, knowledge or method during the process.

I have seen other equally unqualified mechanical freaks shorten slides, shanks – even the bell of an instrument.  Had they worked for one of our leading brass instrument manufacturers or been to some training course? Had they gained a first-class honours degree in mechanical engineering? I think not! Their qualifications consist of a shed, rusty tools plus a large dose of brute force and ignorance.

One genius I sat next to decided that his valve springs were simply too weak to let him play fast passages of music…yeah right! In his self-believed wisdom, he made his own springs which, being of ferrous metal, promptly rusted and completely ruined the valves.

The same individual also objected to the corks on the water keys and replaced them with his own.  Not sure what they were made of, but the conductor stopped the band frequently to find out what was whistling.

Self-soldering is another of the brass mechanical freaks indulgences.  One bright spark, who’s 1st valve slide kept falling out, decided to solder it in place resulting in the whole band having to tune to the aforesaid idiot.  Another bass player took this a stage further and came to band one night rather sheepishly after trying to repair a bar connecting the bell to the mouthpiece shank.  Oxy-acetylene! – I ask you! – a massive hole in the bell and shank! 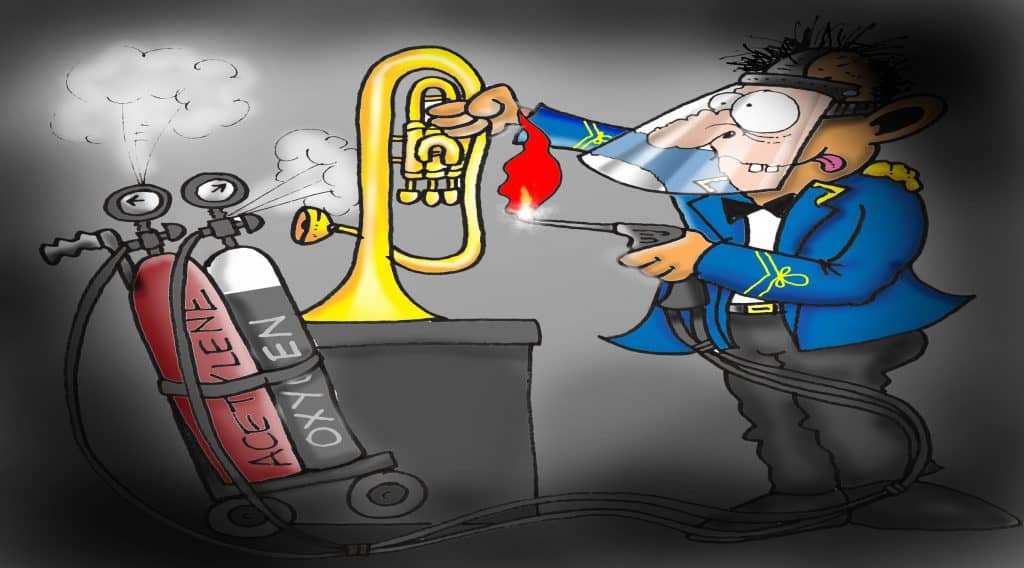 Percussionists are the exception to the rule and have to adapt their instruments occasionally.  Cory’s ace percussionist Steve Jones often tweaks and improvises.  To get a dull sound on triangle in the 2015 National test piece ‘Spiriti’ Steve simply wrapped gaffe tape around each end – Cory won the title – Job done!

On the other hand, it is not advisable to screw and glue coffee table wheels to a bass drum for ease of transportation…particularly when it starts to meander across the stage during a concert, while being chased by the percussionist with part trying to hit it (you know who you are).

There used to be a scouring powder called ‘Vim’ which banding folks of a certain age will remember.  It was great for cleaning ovens or permanently removing evidence from a murder scene.

Alas, in those bygone days there wasn’t the range of brass band cleaning products we have today.  Vim was often used by the clueless element to clean valves which, considering its abrasive properties, did more damage than shaving with a machete!  Valves could have a millimetre of metal removed in a single cleaning session and in turn raising the band treasures blood pressure to new heights when the repair bills came in.

Perhaps it is the bands fault for not demanding a ‘damage deposit’ before placing a £4000 trombone or £10,000 tuba in your average banding buffoon’s care!