Are You Thinking of Joining A New Brass Band?

Thinking of jumping ship to a new brass band this summer? It’s exciting, exhilarating and daunting. You know you’re under scrutiny from the off and don’t relish the prospect of facing the band you just deserted at next week’s contest.  If that is all you have to worry about then it should be plain sailing.  Right???

‘Here’s your uniform mate – just about your size!” 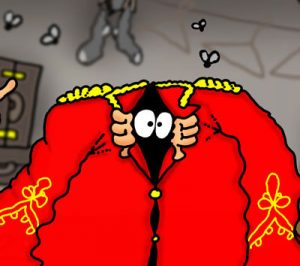 The ‘just about’ double-breasted, highly braided jacket that even a herd of ravenous moths would turn down, looked magnificent when purchased in 1978.

The first thing that hits you is the aroma.  Armpits, mothballs, beer, lager, tobacco (remember the days of the hazy bars and stinging eyes?) curry, kebab, pilau rice and the hint of extremely mature ‘Old Spice’.

Next…the Crystal Palace designer trousers in felt with the red stripe that would have been a perfect fit if you had a coastline instead of a waistline.  It’s been home to a family of woodlice since the last wearer handed them in twenty years ago and comes with a cumber band with stretch marks.

“Don’t worry mate, we have a selection of belts.”

Worse to come…the band tie! Pre-owned and crisp to the touch. So shiny it must have been ironed on a blacksmith’s anvil and has to be beaten with a stick to get it through the washing machine door.

Next, the instrument blown through by the breath of soul’s past. The valves have a brown patina with green-furred copper springs.  Several knocks, dents, and scratches with a heavy duty elastic band on the third slide trigger. Valves like castanets. One sticks. One’s solid and the other goes down and comes back up when it takes the fancy! The lacquer has dissolved around the valve casings and if you are stupid enough to breath in with the mouthpiece on your chops there is an aroma and taste that only a brass player can know.

This musical antiquity is lovingly presented in a case lined with crushed velvet, emphasis on the ‘crushed’.  Covered in stickers from bygone contests and quaint Blackpool terminology. All in all, a fine display of tasteless tack’ that will enable you to find your instrument at a glance in any crowded changing room.  The set of keys for the case are long gone and the hasps and hinges holding the case together are on their last legs.

It gets better! Mutes! All the decent ones have already been bagged.  The last player left and stole the latest purchase and other players in the section grabbed the best of the rest.  You are left with one and a half corks and what looks like a gnome’s hat.

Other members of the band

Every band is a blank canvas and your new player mates are all nice, smiley, genuine people…. Yeah Right! The interrogator who wants to know every personal detail and then tells everyone. The suspicious and jealous faction who view your appointment with a smile at the front and a dagger at the back.  These days you have to have either a degree in psychology or skin like a rhino and preferably both if you are going to survive.

Beware the band manager with a porcelain grin and promises of your wildest dreams. The dead eyes of a great white shark are there for a reason. Their job is a simple combination of ensnarement and press-ganging and they also have the infinite skill of dispatching you like a pheasant for the pot when you are no longer a useful commodity!

The inner stage voice from hell!

The dreaded contest arrives, and you are drawn directly before the band you treacherously left in the lurch. You know they will hang around to listen, just because they hate you. Your nerves are in shreds as you are judged by your new peers for the first time and mentally tortured by your ex ‘friends’ stares in the audience. You split the first note and take vibrato to a new level as your inner voice takes over…

“Here comes my solo…bet I will miss the top note”.

You glance out at the haters and miscue when your eyes land back on the wrong stave. You don’t hit the top note or the six crotchets after it. You are sweating like a mule your tongue is stuck to the roof of your mouth.  Breath control has gone, and an inexplicable twitch appears in your left eye.  The water you brought on stage makes your mouth drier and you are trying to will your hands to stop shaking.

So is it worth joining a new brass band?

So, is the grass greener on the other side of the fence?  If you are thinking of joining a new band this summer – go for it…if you’re brave enough!