Flaming Brass – How Safe is Your Band Room?

After retiring from a thirty-year career in the fire service on those big red shiny trucks, I set up my own fire risk assessment company as cartooning would not keep the cupboard stocked with enough food to hide my starving wife’s and kid’s ribs. 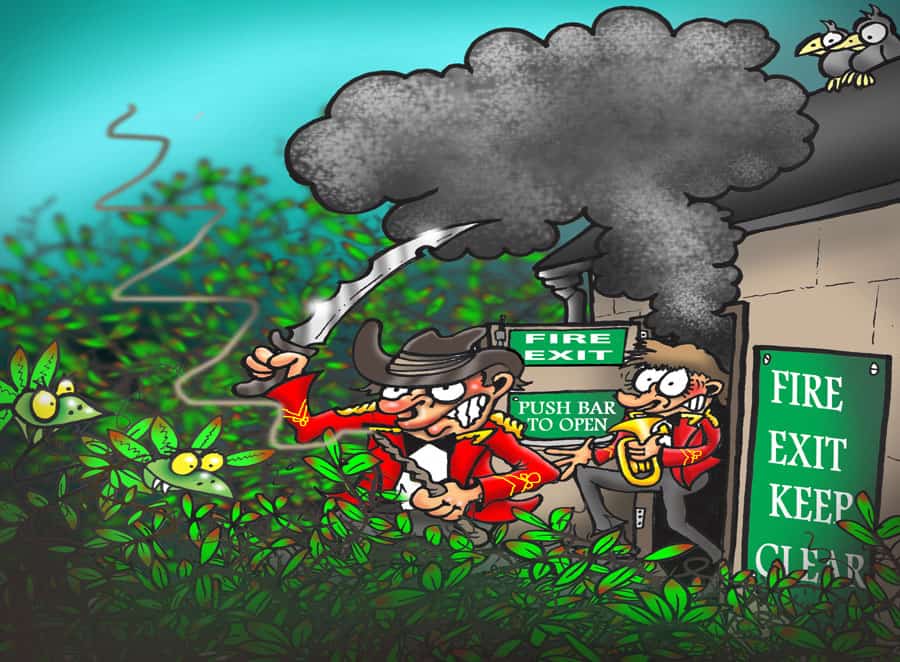 As a fire risk assessor, it amazes me how little attention is given, by most brass bands, to fire safety. Only recently has health and safety become more than a raised eyebrow at a band’s AGM. Masks, social distancing and over the top hand sanitation, that see your fingertips peeling off as you press the valves down, are now gospel!

It is fine for us to sit in the rehearsal room surrounded by highly combustible curtains that could cremate the band in seconds and often with only escape route, obstructed by music stands and randomly thrown bass cases. The band can all fry, but woe betides anyone who dares to sniff, sneeze or cough in rehearsal!

I had a blow with a band (name withheld as my arms and legs would look hideous in casts) who had sound-proofed almost every surface with thick black rubber foam. Great to deaden the sound… absolutely fantastic, but… one spark and at least one half of the band and the conductor would have cooked like Arbroath Smokies!

Another band locks the door during rehearsal to stop any undesirable ‘tea leaves’ from sneaking in, effectively entombing the whole band inside. An ancient, one toothed bass player holds the only key to unlock the door in the event of a fire and he’s strategically placed at the furthest point from the exit. In an emergency, I had visions of the poor old coot being crowd surfed to unlock the door.

Brass band rooms are notoriously stocked with cases, music, banners, photos, notice boards, curtains and drapes plus every other combustible banding paraphernalia that would have made Guy Fawkes dispense with gunpowder. Band rooms stuffed with combustibles are a fires best friend.

I have the unique position of being the only brass bander to drive a fire engine to my own band room on fire. It was Ebbw Vale Town Band back in 1982 when the lot went up in smoke. The sight of my colleagues depositing four hundred gallons of water, trampling over bass’s (as they were never taken home to practise!!!), crushing the complete percussion set and stomping every stand into the mire of jet-soaked embers, will haunt me forever.

In fairness, some bands take it seriously, but there are far too many bands who make a mere token gesture. “Yes, we have fire extinguishers!” the band manager said. They did, two little beauties bracketed to the wall next to the exit door. Lovely! except they were both soda acid extinguishers that hadn’t been serviced since the mid 70s, were installed when Mack and Mort were in their heyday and have been banned nationally from use for donkeys’ years.

The worst example had to be a three-storey band room, with a sprawling layout. I asked where the fire alarm was, expecting to see break glass points and smoke detectors everywhere. I was taken to a piece of string nailed to the door frame outside the first-floor rehearsal room. Hanging off the end, proudly sat a minute brass hand bell. You know the type – a tacky 50 pence far eastern effort that Blackpool landladies summon you with to breakfast. You would have had to have ears like a fruit bat to pick out the alarm signal above a brass band.

The same band had a second escape route that would require those trying to flee the fire to hack their way through twenty yards of blackberry bushes.  That is, if they ever got past the rusted push bar door! I could almost hear the theme to Indiana Jones as I viewed the tangle of thorns. The same band did have a trump card. Enough fire extinguishers to drown everyone unlucky enough to be trapped inside.

I’ll leave you with this sobering thought. Next time you sit in rehearsal, ask yourself a question. If there is a fire, and only a few can get out quickly enough, can I run faster than everyone else?

Brass banding at daybreak Tales of the Banding Unexpected