I overhead a top section player at the recent contest… “Drawn last and I won’t be on stage till gone nine. By the time the results arrive, it’ll be tomorrow before I get home.” I smiled, remembering when I first started playing. Someone must have had an evil streak to invent the fourth section.

Think about it, we generally rehearse in the evening. I shudder when I think of the alarm clock going off at silly O’clock in the morning. When it’s still pitch-black outside, freezing cold because the central heating isn’t due on for a couple of hours and owls look in disbelief as you trudge to the band coach pick up point.

It arrives with the driver peering through a melted circle on the frosty windscreen. You shiver up the aisle with the icy whiff of cigarette stained upholstery, hang your suit carrier and slowly lower yourself onto a damp chilly seat while your breath hangs in the air.

It takes twenty miles for the bus to warm up, and it’s just the number of bodies that are raising the temperature as the coach heater is broken. From frozen coach to Baltic rehearsal room, cold enough to make a penguin weep. The obligatory hymn tunes. Why are we playing four versed of Blaenwern and Lloyd when we have already warmed up (of a sort) before we sat down?

Then the ridiculous twenty minutes tuning up. Sorry, call me old-fashioned, but tuning a band on the day of the contest is utterly mindless. Particularly when the only things missing from the rehearsal room are Captain Oats and a couple of huskies. So cold that everyone is a mile out of tune, anyway. The bright spark in the middle tunes everyone to suit the arctic conditions, and by the time the band gets onto the stage, it is like listening to twenty-five sets of bagpipes being inflated!

But that’s not the worst. The clown with the baton, who stated they would only ‘top and tail’ the test piece, proceeds to run it… three times. Who has a lip first thing in the morning? Not I Gunga Din. At nine in the morning, after the conductor has thrashed everyone, the lips no longer function as they should. 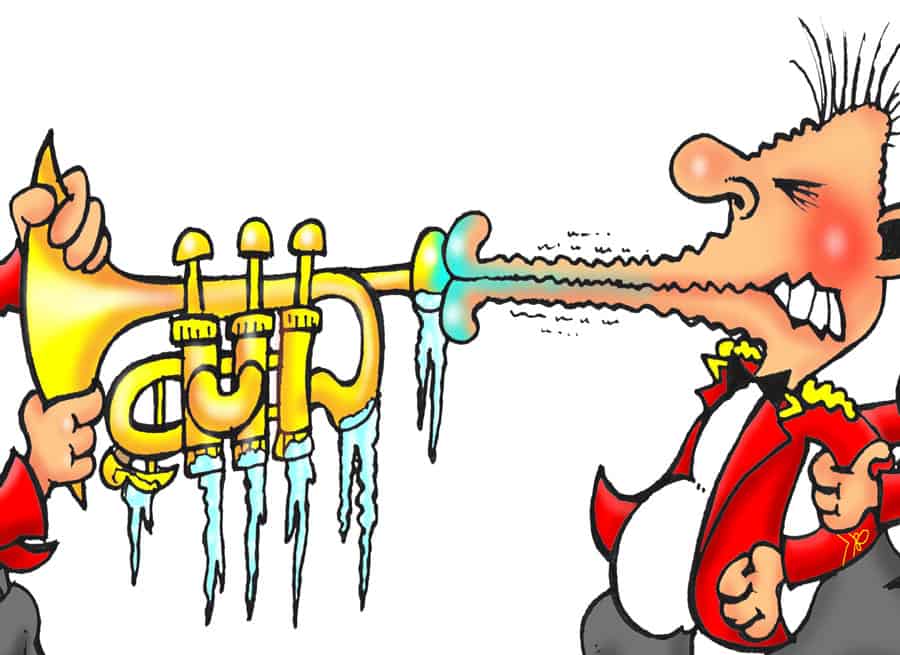 Let’s be fair, you never saw Mo Faro doing a fifteen-hundred- meter run or Steve Redgrave rowing the Amazon to warm up? So why the hell do conductors leave the performance in the rehearsal room then wonder why their hard work was for nowt on the stage with a band of crippled lips?

As the band sign at the registry, the conductor stands on a chair to give a rousing speech supposed to motivate the band to an even higher level. He succeeds in a). Making himself look stupid b) Getting barked at to be quiet by some tea swigging old bat at the registry table and c) Turns his lipless, cryogenic players into nervous wrecks.

They mount the stage, shuffle chairs and stands with pulses racing, cold sweats and uncontrollable shakes. The whistle blows. The conductor stares at every player, making their eyes widen and mouths dry up. He gives a false smile. Fist pumps before lifting the baton. The audience of three, wrapped in a dozen coats, sit back to listen, as the conductor allows thirty seconds to build suspense and make sure the ‘vast’ number of spectators are hushed before launching into the test piece.

It sounds good, very good for the first section, which is loud and fast, requiring little lip control. Then the first solo arrives, as do the splits, and an unusual vibrato that wouldn’t be out of character in a Welsh moorland flock. It goes from bad… to worse… to ‘is this really a brass band?’ The last note arrives with a horrific split.

The hall is silent. The conductor bows and exits sharply left, swearing loud enough to be heard in the box. The band shuffle off with slumped shoulders, moaning that the bar doesn’t open for another two hours.

So, if you think playing in the early evening is a tough call, give those poor frozen souls in the fourth section a thought!

Back to life – Back to reality Flaming Brass – How Safe is Your Band Room?