Tales of the Banding Unexpected

When a brass banding competition or concert approaches, you can rehearse as much as you like, but there is always the potential for something weird to happen before, during or after the performance. 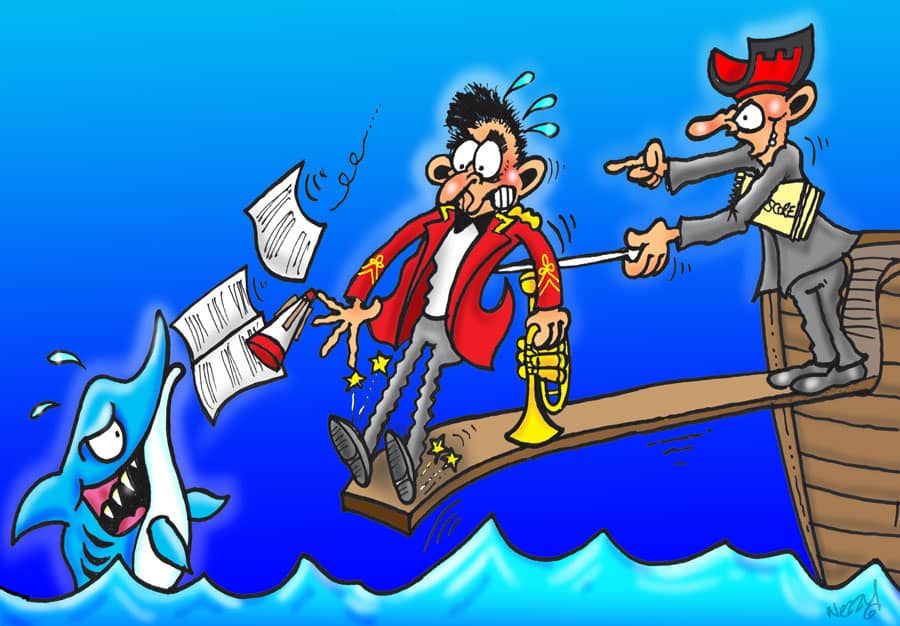 My first encounter happened the very first time I stood up in front of an audience way back in the mid 70s at an entertainments contest in Abergavenny. My band played their first two pieces and next was Edrich Siebert’s ‘Three Jolly Sailor men’.

Myself and two other jolly jack tars from the front row took up our positions at the side of the band to perform this cornet trio. As the baton came down, my stand began to wobble as I had parked it on a loose floorboard. It tilted to the left at an alarming angle and, as I made a grab for it my music floated away behind the stage curtain.

With cornet in one hand and empty stand in the other, I gave chase, retrieved it, placing it quickly back on the stand, hoping the adjudicator hadn’t noticed a couple of missing bars. In my fluster, I hadn’t registered where I had repositioned my stand.

To my horror, I was facing the back of the stage curtain and now, the audience could only see two jolly sailor men. After the last note, jolly sailor man three reappeared to take a bow and was greeted by muted. applause and much sniggering. A murderous glare came from the captain of our banding ship. I could almost feel his baton in my back as I walked the plank.

At an own choice contest, the announcer was obviously not familiar with test piece titles and lacking 20/20 vision while reading his program notes. Amongst his litany of gaffs were…’Band number three will play Beefovens Works’. He also did a fine job on another Beethoven transcription announcing ‘Pathetic’ as the next band’s own choice and did not possess a suitable command of French pronunciation, declaring ‘Petit Suet de Ballitt by Eric Ball’ for another band.

Last-minute deps can throw an unexpected spanner. ‘That’s a Plenty’, a jazzy number with a four-bar drum break in the middle was in a concert I did at Aberfan back in the 90s. The dep on kit arrived at the drum break, belted the living daylights out of every piece of the kit for one bar, then stopped, breathing heavily with a deranged smirk, not unlike Animal from the muppet show. I looked out as we endured three bars of absolute silence and noted many stunned faces in the audience and our conductor’s eyebrows almost on the back of his head!

I played in a unique performance of Kensington Concerto. It was the Contest at Bugle way back in 1991. The weather was horrific with horizontal rain and hurricane force wind squalls. The adjudication comments had several gaps as the extreme blasts of wind made it impossible to hear the band in large sections! One of the few times when an adjudicator could legitimately be deaf to the music!!!

A solo horn player dropping out of a band contest at the very last minute is devastating, especially when they have a massive solo in the test piece. Even more devastating for the first horn if a replacement can’t be found. It was a Pontins regional contest at Brean Sands when a certain solo horn decided to go shopping with his wife and did not return until the band were coming off stage. He met them as they were back in the dressing room and casually asked what time they were ‘signing on’. Fortunately for him, there are not many trees in Brean Sands otherwise a fair trial and a swift hanging would have been in order!

An unexpected apparition arrived at a virtual Zoom rehearsal during Covid Lockdown (band name withheld!). A player sat on the edge of his bed, facing his laptop camera. The whole band was logged into the same call, when his wife walked into the bedroom wrapped in a towel, which she removed and stood combing her hair in her underwear, asking her husband what he was watching on the screen! The virtual rehearsal almost came to a virtual halt!

Flaming Brass – How Safe is Your Band Room? The Farce of Destiny