Cuppa Tea or not – Should You Have Breaks in Band Rehearsal? 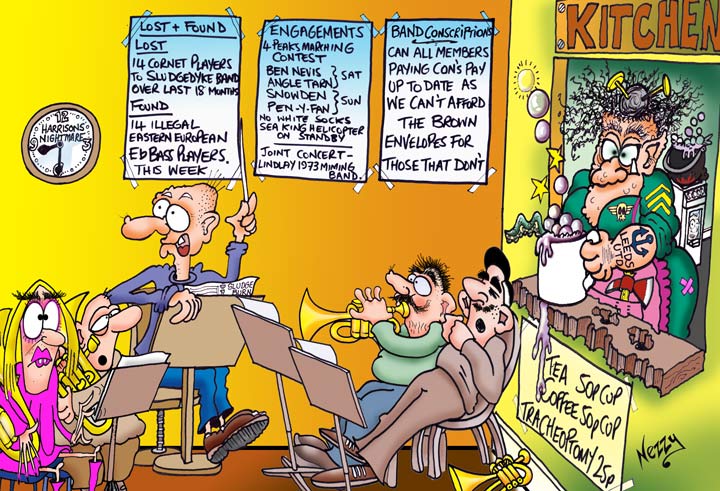 I have been in several bands but never one where there is no ‘tea break’ in the middle…until I joined Ebbw Valley Brass.  Because we have only have one band rehearsal a week the maestro, Gareth “do you reckon’ it’s hot in here or is it me?” Ritter, gives us a damned good thrashing with a stright through practice session.  After doing this for some time I started to ponder if it was better than having the customary half time cuppa cha and chin wag.

Tredegar were always a tea break band (not in the contest sense!!!) when I was playing in the late 80’s and through the 90’s and it was always a good time to give your lip a rest and chew the fat with the other members of the band.  It was also a great way for the treasurer to ensure that you were duly mugged for cons’ before you made a sharp exit at the end of rehearsal.

Other  means for propping up the band coffers were used in the tea break with raffle tickets for the womens committee coffee mornings and jumble sales and of course the highly inflated tea and coffee prices.  By the time break had finished you had been fleeced of your hard earned cash but had a great chance to win a set of carpet grippers, an easter egg or a meal for two at the ‘chippy’ opposite Tredegars famous clock. 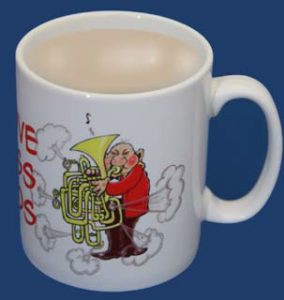 Alwyn powell the then band manager would bellow out of the door to the gaggle of smokers to stop coughing their lungs up and get in for the second half.   We would soon be back on our perches skint and full of Aldi tea.

Moving forward 20 years to Ebbw valley there is no tea break which can be a dry old shift if you have forgotton to bring a bottle of something or other to band.

I don’t usually find the straight through practice a hardship as I am semi retired, can get to band fed, watered and relatively unstressed.  Others are still working to the wire and have to quickly chuck something down their necks (or do without) and race to the bandroom still semi stressed as they blow the first note. This is far too much strain for some of the band members who sneak in and out to the loo at an alarming rate usually at break neck speed.  I have seen one individual get in and out of the ‘little girls room’  during 30 bars rest and didn’t miss a note!

More seems to be done in the two hours as it’s non stop with the mouthpiece constantly on your face but is there something lacking with breakless banding?  On the one hand the once a week rehearsal strategy sits really well with no break as so much more work can be done by the conductor to get the band match fit.

On the other hand a big part of banding is the social side which goes out of the window to a large extent with no break.

On the other foot – is the chit chat at half time just a load of meaningless twaddle or do we really need to socialise to make the band a more cohesive bonded family that works better with more dialogue?

The obvious answer is to extend the rehearsal time to accommodate a break.  However in todays thud and blunder lifestyle, particularly where players are travelling many miles to get to band, this isn’t feasible.  In Ebbw Valley Brass the half time break has been replaced with the ‘after band gossip club’ in the back room and this seems to work.  A majority of players will stay behind and put the banding world to rights.  It was where I was able to get to know all the individual characters in the band.

In conclusion I like the straight through rehearsal as far more gets done especially where you only have one rehearsal a week.  In our bands case it works really well as there is a also a thriving social element after band.

It would be interesting to see what you think and what goes on elsewhere as every band is different?