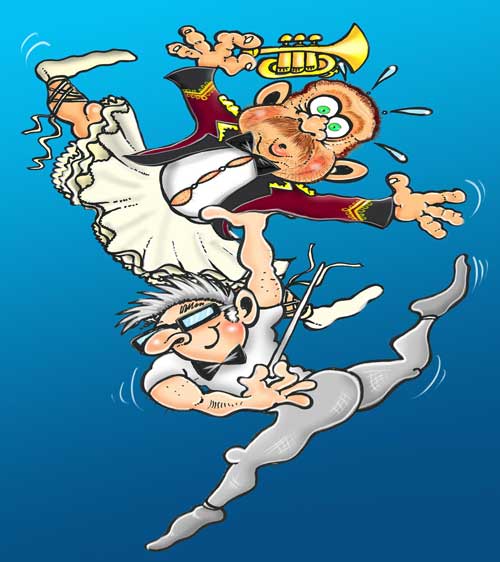 After qualifying for the first section finals this year with Ebbw Valley Brass at the Welsh Area I was delighted to find out that ‘Ballet for Band’ by Joseph Horovitz had been chosen as the set piece for the UK first section finals.  I first heard the piece when I travelled over to Cory bands old bandroom (the one that was burn’t to the ground) to listen to their rehearsal preparation just before the 1983 Nationals in the Albert Hall.

The Cory bandroom in those days was located on the first floor in a row of terraced houses in the South Wales, Rhondda Valley. It was an Alladin’s cave of memorabelia stretching back to the previous century with photo’s, banners and winners certificates adorning every nook and crannie.

“Ballet for Band is literally the music for an imaginary ballet.  The characters and plot were quite clear in my mind before composing it, but I prefer the audience to exercise its own imagination rather than to be influenced by mine” Joseph Horovitz

Major Kenny’s wife Barbara had written a short story to portray her version of what the ballet was describing musically.  From what I recall it was a tale of unrequited love in a small village with a drunk and some old codger as the main characters.  It was 33 years ago and as I can’t remember what I did yesterday, let alone a third of a century ago, I am afraid the exact details of barbara’s plotline escapes me!

The point is that Barbara Kenny’s story plus the magical skills of Arthur Kenny and the talented Cory players who had great team spirit turned a series of notes in a score into a story then into a performance of magnitude and ultimately to victory.

What I particularly like about Ballet for Band is that it is not rock hard like many of the more modern test pieces and is very lyrical with beautiful melodic lines.  When it was announced as the test piece I could immediatly recall the test piece in my head from start to finish.  Try doing that with some of the more recent test pieces at the RAH!

There is drama, meloncholy, passion and plenty for every player in the band to do.  It has solo’s here and there but it is essentially a band piece that requires everyone to work harmoniuosly as one.

For a first section band Ballet for Band is quite a challenge.  The notes are not that difficult and the range is not stratespheric.  However there are so many nuances, so much detail and link changes to be dragged off the score that the winner will be the one that finds all the inner detail and paints a masterpiece full of character.

There are plenty of traps in the piece and the biggest is dynamics.  The Ballet is not Rudolf Nureyev aloft a 650 Norton Motorbike sporting a 9lb Howitzer.  It is very subtle with some stunning soft playing achievable.  For the most part the piece does not extend above forte and conductors will really need to organise the dynamics of the inner parts to bring out those important nuances.  If it goes wrong it could be a disaster particularly in the very quiet passages.

Players often say that they can’t wait for the contest day to arrive.  Me…I am a bit old in the tooth and weird in that sense.  If I really like working on a test piece I want to enjoy the preparation as much as possible.  If it was a different, whizz bang test piece sounding like a clanger with flu I wouldn’t be able to wait for the contest…to be over!

Ballet for Band is class music that I really enjoy rehearsing – (even more than playing on the contest stage at Cheltenham).  Let’s just hope that the music panels that pick which contest music we play keep finding gems like this to test and and let us enjoy banding!

Cuppa Tea or not – Should You Have Breaks in Band Rehearsal? Podcast 5 – David Collins