Breathless Revisited – a trip to the Victoria and Albert Museum 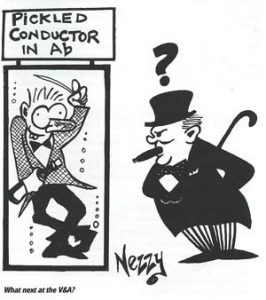 ‘Breathless’ was a set of brass band instruments crushed flat in the steam press of London’s Tower Bridge. Cornelia had arranged the 54 flattened instruments in a circular design suspended by wired between a circular opening in the upper floors of the museum. I was really impressed both with the design and the fact that brass bands featured in one of the most prestigious buildings in London. 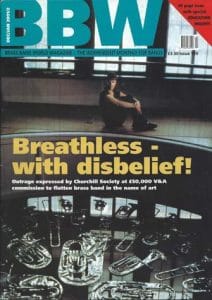 I saw Cornelia Parkers work in a totally different light.  After comparing it with some of the prize winners of the Turner Prize (such as half a pickled cow and an empty room where the lights go on and off!) ‘Breathless’ seemed a breath of fresh air worthy of the £20,000 Turner Prize at the time.

To cut a long story sideways my letter made the Editors letter page complete with the cartoon ‘Pickled conductor in Ab’. A couple of days later was delighted when Bob Mulholland rang and asked me to become BBW’s cartoonist and have never forgotten how it came about.

It has always been my intention to go and see ‘Breathless’ in the Victoria and Albert Museum but for one reason or another, I never made the trip…until a few months ago.  My other job is a fire risk assessor and I was in London looking at a building in Westminster and had some time to kill.  As the V&A is not far from Westminster it was the perfect chance to pay it a visit.

The V&A is basically square with many levels as far as I could see as I walked around it (I lost count of the number of floors!) and it quickly became apparent that it wasn’t going to be easy to find ‘Breathless’.  I asked a Museum guide who told me that it didn’t exist!  I then asked another guide who had not heard of it and consulted the computerised exhibit database.  She was amazed that indeed it did exist and decided to come with me to see it for herself.  she told me that she had been a guide for donkey’s years and had never heard of this artwork. 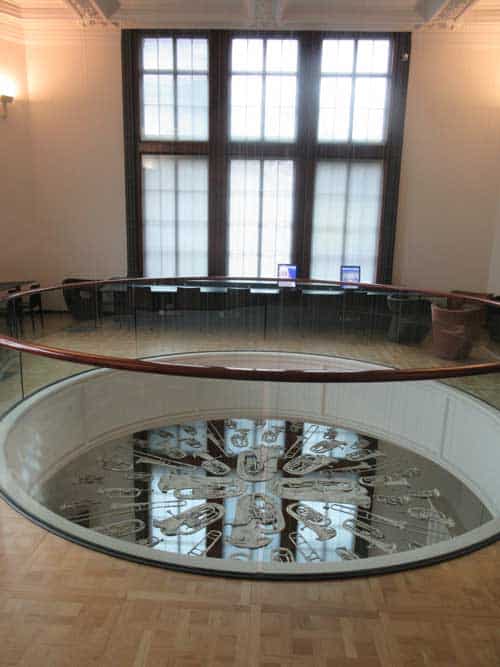 I was reliably informed that Cornelia Parker’s masterpiece was set in ‘an ocular’ space (bloody great round hole in the floor) created between two floors in the British Galleries, Room 121, Clore Study Area.  Please remember this if you do want to look at this extraordinary work as the Museum guide maps were designed only for people who can solve Rubik’s cubes in under 30 seconds!

We eventually found it at the rear of the glass section and I have to be honest I was stunned with its visual impact.  Pointless me describing it – you have to see it to know what I mean and the photo’s I took just don’t do it justice. It just struck me as a surreal to see a whole set of brass band instruments totally flattened and floating in mid-air. The kind lady assistant was also stunned as she had never ventured into this section of the museum. we were both stood looking at 54 flattened instruments hanging in mid-air open-mouthed.

I explained to her why I wanted to see this particular exhibit and she insisted on taking several photos for me – a personal guide and photographer – nice one V&A!

If you are ever in the V&A please go and take a look at it  – you will not be disappointed.