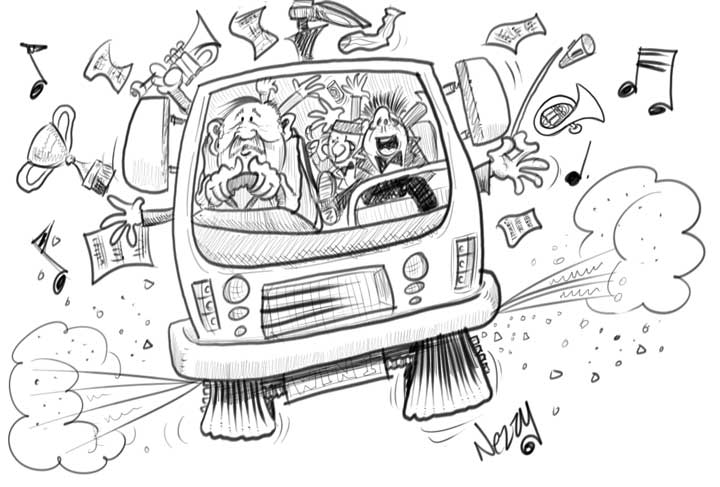 Sadly, due to the affluent society we live in, there is an abundance of cars and the traditional band coach to nearly every contest is reserved for long haul only. Sadly because it gave members of the band, supporters and committee the chance to talk and interact for more than the duration of a rehearsal tea break. Thankfully coaches are better, roomier and more reliable than the charabanc that used to cough and belch its way to London or Blackpool. So what are we missing out on by taking the car instead?

Getting the bus loaded up – duckers and divers!

“The coach will arrive at the bandroom at 7am prompt for loading up…how many will be at the bandroom?” says the band manager, at the penultimate rehearsal, who already knows the answer. Everyone else has conveniently asked to be picked up on the way including several band members who live only fifty yards from the bandroom.

After the band manager, wife and whippet have sweated like mules loading the bus there are several pickups which loop back and forward in the local area so that the bus is still within 1 mile of the bandroom an hour later.

Unable to get time off!!!

The other annoying facet is the National finals – especially the Albert Hall where a certain profession within the Brass Band fraternity are totally ‘unable’ (for a good definition of ‘unable’ – read John Barbers post on committmment)  to get a Friday off even when they know in plenty of time (at the Area) and as such the coach cannot leave until after they have finished work making the coach arrival time mid evening without a note being blown for rehearsal and having to negotiate London in the rush hour (sound familiar?)

Seating strategies back to front

The bus is soon making some progress after the last pickup and the hierarchy of seating is quickly established. Young, rowdy and foul mouthed at the back. The older, wiser, committee members and supporters at the front and all others including none of the above, geeks, gamers, families, couples, the sensible, insensible and middle aged in the central section. Coach seating runs in parallel with a banding career where you start on the back row and progress to the front! 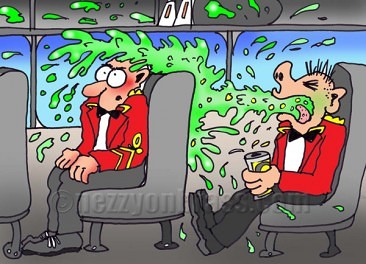 There is another category that drift according to the location of the coach toilet (if you are lucky enough to have one and it actually works without a nasty whiff emitting from within). I have been on some coaches where a canary would have been advisable to check the viability of the atmosphere before entering the chamber of horrors!

The members of this category are split into three – the poor traveller (coach sickness), the  naturally weak of bladder and those with self imposed bladder impairment due to over indulgence (the latter usually only sit near the loo on the way home; the former readily book a return, ring side seat).

The sign inside the bus clearly states –‘No consumption of food or alcohol to take place inside the coach’. This is normally re-iterated by the coach driver but rarely enforced as this could affect the weight of coinage in the driver’s collection on the return journey. Both the written and spoken word may as well have been in a rare and ancient dialect of the upper reaches of the Limpopo River as no one ever takes a blind bit of notice.

The usual fayre of the discerning bander (pre contest) is a sensible diet of a few sarnie’s, crisps and a no alcoholic beverage i.e. on the way there. There are also sub cultures that make for interesting observation.

Tredegar Band had a bass player, Gwyn Press (who is sadly no longer with us) who regularly knocked together sandwiches that are yet to be discovered by any chef on earth. They contained disparate and deadly ingredients. I once saw him eat a Lime pickle, gone off stilton, rhubarb chutney, chilli and garlic salt sandwich (I kid ye not) which burnt the nostril hairs off all sitting within 10 seats front and aft. I swear the sandwich was smouldering with a slight green glow!

He had the constitution of a bull rhino and wouldn’t bat an eyelid as he devoured Satan’s baguettes while all around were quickly racing for the assembly points at the back seat and drivers lap! The stench from those sandwiches still gives me nightmares!

The next member of the sub culture is the cheap scathe who brings bread and margarine sandwiches and a bottle of water. You can usually tell who these are as they look pasty, undernourished and sit counting their ribs. At the other end of the Richter scale is the ‘overprepper’ who brings enough food in one of those little shopping trolleys to feed the massed bands of the RAF. It’s awful to watch as they are still chewing on the warm curling chicken mayo sandwiches on the return leg of a 3 day band trip to London, adding a dash of pepper to disguise the fact that either the mayo or the chicken is on the turn!

I nearly forgot the other members – the outright spongers who prey on the weak willed, kind hearted and downright stupid. Consuming everything they can wheedle out of those who have come prepared. This is a good ploy as it leaves more wonga in the back pocket for post contest refreshment but there is a terrible risk of food poisoning from the potentially vile mixture of begged, borrowed and misappropriated fodder.

A new phenomenon came into force a number of years ago – the coach driver’s tachometer. This really only affects bands from outlandish locations who are forced to make a stop while the driver takes his enforced rest. This is fine when the tacho’ stop is planned.

However I have been involved in a European coach trip where (due to traffic congestion) we were marooned on the side of the road with the toilet out of action and little tree cover for miles. It was also in Holland which, as you are probably aware, is as flat as a third cornet at an outdoor carol concert. The combination of no trees, flat landscape, gallons of beer and no toilet for at least an hour led to some interesting and innovating ways to relieve oneself without causing unnecessary embarrassment. I should point out this only applied to the male contingent on the coach.

The ladies were far more refined and waited until we were underway again but almost ripped the coach driver to pieces when he nearly missed the next service station (hell hath no fury like a woman bladderly challenged!!!).

To keep the masses entertained there are a number of ploys. Bingo…(Yawn), quizzes (better) and the best of all the reading of the adjudication on the way home plus a chance to hear the bands performance via the coaches audio system. The latter is usually played first and technology has improved over the years which is good in one respect (as you can actually hear the notes) but bad in another – especially if you are the one who has single handedly made the biggest impact on the bands lowly placing due to horrendous cock ups!

If it’s a bad recording you may have temporarily got away with it but there is no hiding from the adjudicators remarks especially if they have found those defining moments…’Letter G soloist makes a brave effort but it doesn’t quite come off’… you can feel yourself cringing into the coach seat springs as the adjudicator adds…’Thankfully the next soloist has some panache and fine tone…’ – you are now wondering if the rear escape door could be reached by crawling across the luggage rack but there is no easy exit from the howls, hoots and scathing abuse. All good fun of course and will help you to develop an extremely thick skin…especially when you posses a tone similar to a gnu attempting to blow a rat through a rissole!

The return journey win or lose

The return journey can only take two forms…either jubilant or thoroughly depressing. When the band gets it right, (or dare I say it, the adjudicator happens by chance to see the band in a favourable light whether they have got it right or not), the mood on the coach could not be better. That is apart from the coach driver who secretly likes a band to lose big time. It makes for a nice quiet journey home as everyone crawls back on board with a whimper then sulk and whisper evil curses directed at the adjudicators, conductor and winning band.

When the band wins its show time!!! Alcohol appears from every nook and coach cranny. Songs that would make Mrs Brown blush are sung in a variety of keys by a cacophony of singing ability and even the most temperate put up with this unruly drunken din because…the band won!

The adjudication is read over the coach microphone and even the most awful disasters recorded in the illegible scrawl are laughed away and forgiven (apart from the conductor who secretly makes copious mental notes preparing for the next pre-contest cull i.e. fair trial and swift hangings).

Sixteen toilet stops later, collection for the driver and all pickups stagger or are bundled off the coach and its pitch dark on arrival at the bandroom. The band manager, wife and whippet (all with miners cap lamps through previous experiences) unload the coach of instruments, percussion, uniforms and enough empty tinnies to forge a new Bb Bass. This is what the brass band movement is being deprived of with too many banders’ travelling by car. The chance for the band to bond as one. Miss band coaches?…the hell I do!