Asthmatic gerbils – blowing out the cobwebs

Where is my trombone? I’m sure I left it in my car.

This should be OK.

I’ll be OK- he won’t pick on anyone. Not on the first night back.

The thing is it’s not like I’m out of practice, well, no more than anyone else perhaps and Christmas is a busy time. Those three weeks of band holidays just fly by, couldn’t have picked it up even if I wanted to, I’ve not had a spare five minutes anywhere. Nope…

It won’t be too bad – Pete’s brought his baritone. There’s no way he’ll have done any practice and he’s pretty rubbish anyway.

Why do we always start with hymn tunes? I hate hymn tunes. My part has a range of a 5th and after playing it through a few times my face looks like a scrotum and has about as much mobility as my Gran.

And why doesn’t the percussion section have to do hymn tunes? Doesn’t seem fair. They get to sit at the back and pretend not to be playing on their phones.

I got a new phone for Christmas. It’s got a camera.

The conductor looks like he’s had a good Christmas, he’s got a new jumper too. Marks and Spencer’s maybe?

Wonder if he’s got a gift receipt?

Who was St. Cuthbert anyway?

In addition to the new jumper Maestro has a new haircut. Very short. Efficient.

I could do with a haircut, either that or I’ll need to think about buying a hat. I’ve never looked good in a hat though.

I bet his hair doesn’t take long to get ready in the morning.

I’ve got work in the morning. I’ll need to be up at 6am, must remember to set the heating when I get back.

I wonder if Maestro has work in the morning?

Pete’s not sounding great. Pretty sure Herbert Howells wouldn’t have been a massive fan of all those split notes.

No sign of Graham – he’s where? At another parents evening? But the school term hasn’t even started yet has it?

I can’t find the test piece in my case, this could get awkward. Surely I didn’t leave it on my practice stand at home? No thank God I had the good sense to leave it on the music stand so as not to lose it.

I wonder if the errata’s been done yet? There’s always some errata. Why don’t composers and publishers talk to each other before the music’s printed?

On to my third embouchure – more top lip.

Wonder how United are getting on in the Cup tonight?

Damn it – missed my entry. It’s OK I don’t think the jumper noticed.

I’m pretty sure Pete missed his entry too.

How did I get these small dents in my bell? It’s like a legion of ants with little hammers and little chisels and big ambitions have been let loose on it.

Thankfully it turns out there’s no trombone solo in the area test piece. Pete hasn’t got any solos either, we might stand a chance.

There is a horn solo though…

The percussionists at the back still haven’t done anything.

This ‘Kings Herald’ is quite lively, go Herbert!

It’s quite tricky to pull that look off in the space of a crotchet but I think I’ve nailed it.

Either that or he now thinks I’m constipated.

I do need the loo. Will we be going for a pint after band? First rehearsal back it seems a shame not to?

I need to find a part of my lip that will still buzz, I’m starting to sound not dissimilar to an asthmatic gerbil.

Who’s never played the trombone before.

This second movement ‘Cortege’ is a bit of a dirge, you’d think someone had died. Come on Herbert, liven the party a bit, what about all that good stuff in the first movement?

A good effort on horn – maybe next time.

What exactly are the percussion section here for?

Time to go home, made it through unscathed.

I think that went pretty well all things considered! 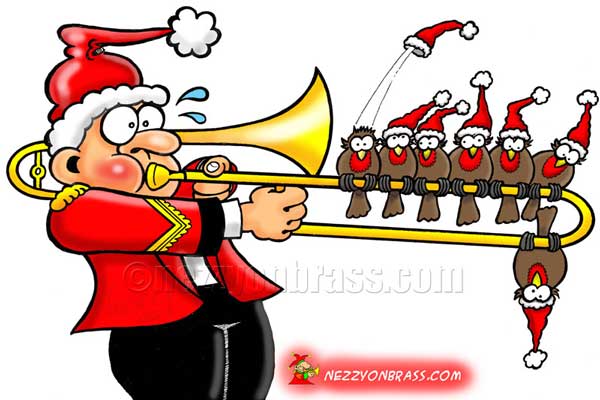 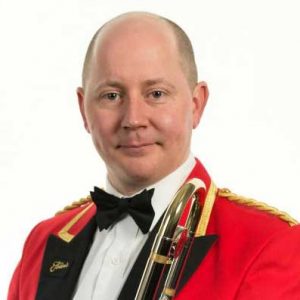 John Barber created this article for his ‘And another thing’ feature in the February 2017 edition of Brass Band World Magazine.

John is the Principle Trombone of the World Famous Fodens Band and is a teacher at a local school in Sandbach, also the historical home of Fodens band..

For the Good of the Band – V.I.P. Band Member! Bremner Sshhmute – Best Practice Mute for Trumpet Cornet and Other Brass