A Conductor’s Guide to Sacking Players

The Best (and Worst) Ways to Hack out the Deadwood!

The best way to terminate a player is to do it in the old fashioned, polite way and be direct.  Tell them why and let them go.    It’s that simple and it’s the best way, so that they know why they are no longer required (even if they don’t like what they hear) and you have been open and honest about it.  Having sat in various band rooms and listened to members of other bands for over forty years, there are other ways of getting this job done!

Promotion to the Rank of Incompetence

This is very effective for players of a nervous disposition.  Heap praise and move them up the line or onto a solo instrument.  Then pile on the pressure with pieces of music beyond their ability.  Single them out at every occasion and soon they will crack under the strain and beg to be moved back to their original seat, which you will have filled, and voila! Bye bye. (If this fails – sack them like a dog!)

Demotion to the Rank of Insignificance

This is very effective for good players who possess undesirable attributes such as an inherent lack of respect/ discipline or having their eye on the conductor’s position.  Move them down the line until they are in a position that bores them to the back teeth.  Then apply a dash of bullying – in this case look at their weaknesses and amplify them with jibes like:

“How did I ever let you play with that tone?”

“Do you actually possess a tongue?”

“Your sense of rhythm is reassuringly unstable”

“Your dynamic range needs a defibrillator”

Once they are suitably undermined, keep moving them down the line until they eventually fall off the end into insignificance and leave.

Nit-pick, single out, undermine and generally crawl under the skin of the player that is to be dispatched, until they leave.  Stand over them when you single them out to play on their own.  Pass their part down the line at every opportunity.

Glare at them when a wrong note appears – even when you know it’s not them.  This is a very effective tactic but over time will bite you back as you will become known as a tyrant and stop players coming to the band.  An added disadvantage is that the bullied might just chin you if you push them over the edge.

Sometimes it is necessary to carry out a general cull at the end of a banding season.  Here’s a top tip to make it less painful and effectively takes the sting out of the fallout.

Recall all uniforms, instruments, music, mutes, lyres and any other object owned by the band  for an ‘inventory audit’ (note the ‘invent’ part of the term!!!).  Once all kit is in, send out the sackings by letter from the ‘committee’ so that you are blameless.

Don’t answer the phone for a couple of weeks until the ‘sacked’ get bored.   Smugly sit back and watch the venom on Facebook at your leisure.  The sacked unwittingly advertise the band, as those watching the viral scandal unfold are more interested in who the replacements are than any rants from the disgorged!  You might even get a player as a result of this high profile scandal.

Use of Third Party Gossip

Ask the biggest gossip in a rival band for the phone number of one of their players (in the same position as the player in your band you want to remove).  Then ring the player and have a general chat about their aspirations for the future.

Next step is to send them a Facebook friend request and when they accept, share something they have posted.  Let the rumours begin.  It won’t take long before your target player gets the hump and clears off, and your conscience is clear as you have done nothing wrong.

Another ploy is to tell your rival band gossip that your target player is thinking of leaving.  With a bit of luck (combined with upping the bullying stakes in rehearsal) another band will approach them and they will leave.

Invite the player you want to a rehearsal or two when you know the player to be sacked isn’t going to be there.  Even better (but a bit buttock clenchy) is to invite them over when your target sacking is in rehearsal.  Uncomfortable, but highly effective.

“You need more time with your family, your work commitments are increasing…in other words you’re sacked!”

If the player you want to remove has certain days/ times which are inconvenient for them to get to band, alter the rehearsal schedule so they will never be there.

Soon they will either leave or make the sacking easier.  Just make sure you give the committee a stone wall reason why you need to change the times so it can’t be discussed and reversed.

There is always a conductor’s ‘Egor’ in every band who can be fed with information to be placed between the right ears where appropriate.  Tell the band nark that the target player is under scrutiny with a view for replacement and tell them to let everyone except the aforesaid victim know.  It won’t take long before they do know and it’s bye bye. 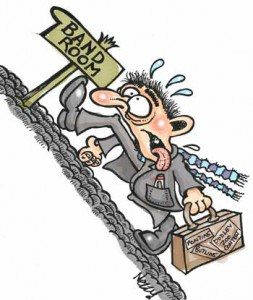 Are you ever too old to return to brass banding? [more…]