20 Ways to Leave Your Band

When it’s time to leave your band, for whatever reason, it is not a pleasant experience. If you are a hard nosed, pig headed, don’t give a monkeys type of bander – you don’t need to read this because you won’t give a tinker’s toot anyway!!!

For those of us with a conscience, shame, guilt and all the other human traits that make the parting of the waves so gut wrenching I have 20 suggestions on either how to soften the blow or by being totally deceitful to make it a little easier to escape…

Start to play really badly in the band room.

Split notes on stage and show all the symptoms of stage fright e.g. pace up and down, spray water on your face and armpits and don’t smile at anything before going on stage. A great tip is to make your registration card shake like a butterflies wings at the registration point. You will soon have your marching orders but beware that your intended band doesn’t see this ploy in action otherwise you will be in banding limbo as no band wants a ‘point dropper’ in their midst.

Tell the band you have to move house…

…because of family or work reasons (miraculously near to the band you wish you join). 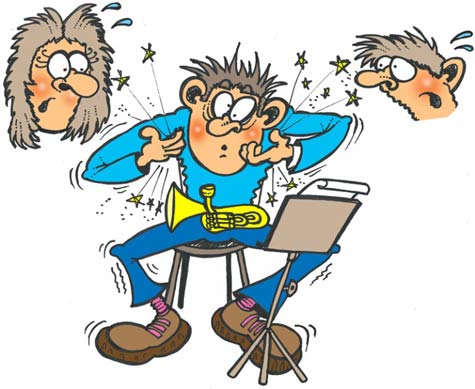 Tell everyone that your doctor has diagnosed a mysterious tropical disease and has advised you to stop playing…nobody will try to stop you leaving! Once your place has been filled you can make an amazing recovery and join the next band.

…and have to stand down. Then join the next band which just happens to do 52 concerts a year!

“I have decided to retire”

make sure you receive the gold watch, cards and gift vouchers before un-retiring to the next band.

Leave your instrument, uniform and all the other banding rubble in the band room and never return.

This only works without any repercussion if you are a disposable player (i.e. can only just about play ‘Oats and Beans’) because they won’t even notice you have left until the registration card request arrives from the next band. If you are up to ‘Pandora’ and ‘Cleopatra Polka’ standard this method will not work.

…and quote the name of the person you told this to when you joined. That person needs to be either deceased, in prison, completely Ga-Ga, or a friend who used to be in the band who can back you up. Stick to your story and lie like a cheap watch.

Tell the band you have been made an offer that nobody in their right mind could refuse.

Make up or hint at a massive retainer from the next band. They will hate it but secretly agree.

“I need more time for my family”…

The oldest banding chestnut in the history of banding resignations!!! Then forget all about your family for the next band.

Chew a mute and smoke cigars in rehearsal. Stand up and play ‘Lazy Trumpeter’ in a live concert (in the middle of Nimrod usually does the trick!). Don’t do this in a contest e.g. Flight of the bumble bee in the middle movement of William Heaton’s Contest Music as you will get noticed by every band and possibly make the headlines on 4Bars Rest and Brass Band World Magazine…then you are in banding wilderness pending a name and gender change! What you can do at a contest is to turn up with a hat and trainers to go on stage.

Eat a tray of whelks in between test piece movements. If this doesn’t work straight away start calling the conductor ‘Dave’ at every opportunity. Eventually you will be taken into the broom cupboard for a quiet word and a swift exit.

…‘So I can do the National’ then never return. You will have been replaced and forgotten anyway.

…(typed and unsigned and penned by your good self) from ‘someone’ in the band which compels you to leave.

If this falls on stony ground do the same to some of the principle players – especially if they are also on the committee. If you are cutting enough you will be removed!

Approach the committee and tell them that you are unable to attend band anymore as you are in extreme financial difficulties.

At worst they will pay your subs and travelling (at this point look for another excuse) or you will be let loose. Announce on Face Book that you have had a windfall just before joining the next band to dispel any suspicion of lying!

…and state the real reason that you want to leave – this is simple, straightforward and extremely stupid as you will be ‘de-friended’ for eternity.

…Diva strength and walk out of the band room – the M.D. will get the blame!

Keep a RANK spare set of clothes just for rehearsal.

Buy a bag of B&Q well rotted farmyard manure (just under £5 sack) and hang the set of clothes directly above the opened sack in your shed. Wear the clothes to band (You will also need a small tub of ‘Vick’ to dab just under your nose so that you don’t suffer the stench that everyone else in the band room will). Two rehearsals tops and you will be ejected from the band. You might end up with an awful nickname for a while but Ho! Hum! (emphasis on the hum) Who cares when you join the next band in a nice set of lavender fresh clothes?

…the bag is a prop filled with coleslaw. Then in front of everyone eat the contents of the bag. If this doesn’t get you chucked out then nothing will!!!

Last but probably the most effective is to tell everyone in the band that there is something that you may be allergic to in the band room.

Wear far too many clothes in rehearsal so you sweat like a mule and rub a tiny amount of one of the following in your eyes – onion juice, fiery Jack liniment or Medium Nando’s sauce (don’t use the hot sauce as it will remove your eyeballs from their sockets). Everyone will think you have contracted bubonic plague and will be glad to get rid of you. They will then realise that it was ‘an allergy’ after all when the symptoms disappear in your new band.

Chat up the conductors partner or the best player in the bands other half.  Always sit by them on the coach, contest cafe, pub and stare doe eyed at them.  Friend request them on Facebook, like everything they post and always comment.  You will soon be out of the band albeit with a black eye, missing a tooth or hospitalised.

So there you have it some great excuses to get you off the resignation hook. Always remember brass banding is a relatively small community and what goes around comes around. You don’t want to leave on bad terms if you can help it as it will all come back to haunt you at the very next band contest. Being dishonest is not something to be proud of but some diplomatic white lies and drastic measures can sometimes be the best remedy!