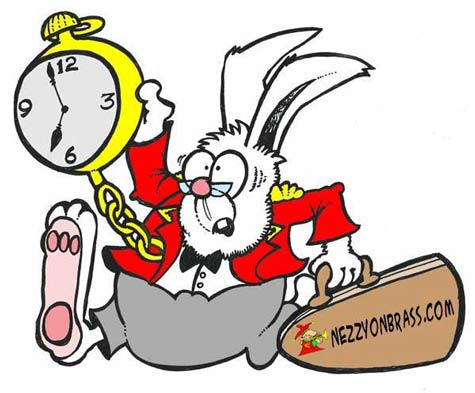 This time next year will you look back and smile at progress or frown at missed opportunity?

There is nothing worse than a latecomer for rehearsal and it can be highly disruptive if it’s for a concert or heaven forbid a contest. Habitual lateness makes players and conductors boil with rage and puts you above the parapet. Do yourself a favour and make it your pledge to be early for every practice and job. If you are a dodgy player it is another nail in the sacking coffin that can be removed if you are punctual.

Practice your instrument every day

The only way to progress from ‘mediocre’ to “Move over Gary Curtin – who’s been sitting in my chair then?!” is to practice your lip off every single day without fail. No matter how ill, indifferent or tired you are, drag the beast out of its case and do at least an hour. Make it your mission to practice every day for a whole year when you go on holiday, in hospital and even on Christmas Day. No excuses, no whining – JUST DO IT!

To make this a little easier to find the time to practice as you are always ‘so busy’ drop your smart phone into a large bucket of water and de-friend everyone on Facebook. This will give you at least 50 hours a week to pick up that instrument!

Be magnanimous in defeat

No one likes a sore loser and it looks highly unprofessional if you abuse the winning band. So…even if the dodgy adjudicator has put you in second place after listening to the ‘winning band’ for a few bars before declaring them the winner – smile sweetly as your rivals collect their (your) trophy. Clap politely after the adjudicators speech (even though it may appear to be a pack of lies and you wish try out a new technique of disembowelment) and most important…congratulate the winning band immediately and with sincerity. You will look good and after all it’s not their fault that they were corruptly awarded first place. Only then can you slope off the cry the rain, make unspeakable threats and swear loudly.

Be positive with the rest of the band

Nothing spreads apathy like a good dose of moaning.  There are certain players who just love to spread doom and gloom and bring everyone else in the band down with them.  Positive thinking works.

Negative thinking also works but in the wrong direction. This is particularly important if you are in a principle chair.  There is nothing as demotivating as a griping soloist, whining and whinging.

So keep smiling and upbeat and if you hear a whinging git in the band steer clear of them!

Most players fool themselves by practicing their favourite solo or that special moment in a test piece that they can actually play well. Absolute waste of your time, the conductors time and the bands time – get real! Look at the stuff you cannot play. Those nasty bits that you avoid like the plague and those really boring exercises that everone told you were so good for you…yes you have got it in one…Looooong Notes! Look at the stuff that makes your skin crawl, that bores you senseless and makes you lose it big time because you can’t play it.

Did I just mention loooooooooong notes? What is the point in practicing the most boring thing on earth I hear you say???…ahem… Is your sound quality up to scratch or do you sound like someone trying to blow a rat through a rissole? Even if you have a good sound there is always room for improvement and long notes are the answer (with a lot of self listening thrown in for good measure). Try recording yourself playing and ask yourself ‘is that really me playing that awful din? Play a zillion long notes and really concentrate on the sound quality. Listen to those brilliant players who sound like angels. David Childs, Richard Marshal, Sheona White, Gary Curtin, Zoe Hancock…hear their beautiful sound and if you really listen closely you can almost hear the hours, days and weeks of long notes and dedicated practice that they have put in. 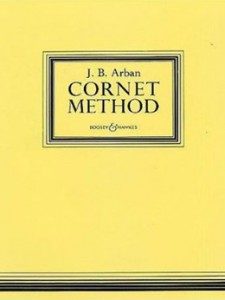 If you are unable to do the technical stuff – why not? If you can’t double or triple tongue set yourself a mission and give yourself a timeframe to complete that mission.

Cleopatra Polka by the end of 2015 followed by a rendition of Rousallka’s song to the moon that would bring tears to Philip McCanns eyes…JUST SET YOUR TARGET AND DO IT!

Jean-Baptist Arban may have created his cornet method donkey’s years ago but it still holds good today and has almost every aspect of what you will need to get better. 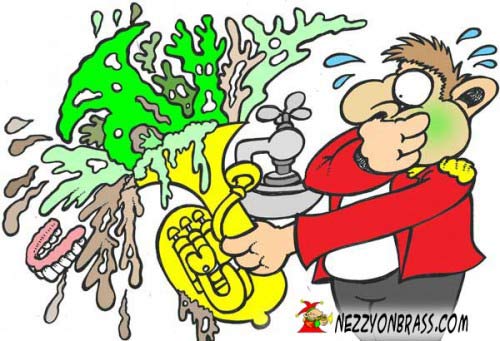 Keep your instrument in tip-top condition

There is nothing worse than a ‘minging’ instrument. Spit and tongue sludge congealed all the way round the pipework is bad enough. But when it’s allowed to fester and is on the turn…Oooooh! Nasty!

Scrub the damn thing every week! Give it a good blast out to remove the aforementioned slime. Never will you accidentally breath in the deathly vapours from the bowels of the valves and nearly pass out again. There is only one worse moment in your banding career – doing the same on someone else’s instrument and catching a lung full of their expelled encrusted mucus – truly horrific!