10 stage conducting styles – which one is your bands M.D.? 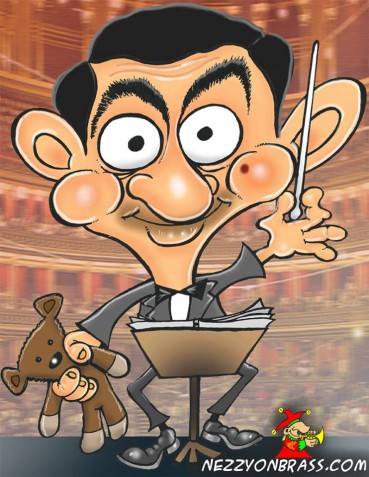 The Good the Mad and the Ugly!

It takes a lot of guts (or insanity) to take up the baton, especially on stage at a brass band contest. Hours of hard slog in the band room for weeks before a contest magically conveying their interpretation off the score into the brains of the players. Getting them all to play consistently and together and achieving that interpretation takes some doing.

One of the main failings of a conductor is to tell their band to ‘do exactly what has been rehearsed’ in the band room – on the stage…and then not doing it themselves! Almost every conductor has an alter ego that suddenly appears in the limelight and start doing strange things on the contest stage… 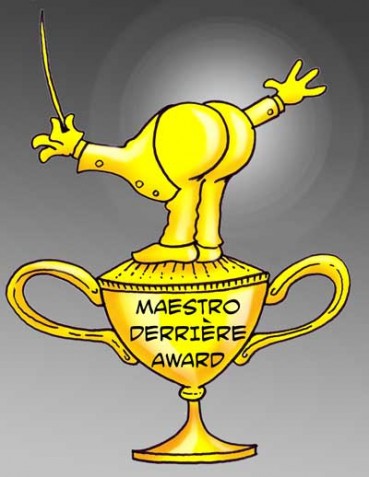 I remember one contest where several female banders made a huge effort to go and watch what was regarded as a ‘cuppa tea’ band. Curiosity got the better of me so I followed them into the hall.

The band in question were languishing at the bargain basement of the championship section and I couldn’t quite understand what all the fuss was about. The girls plus a lot of other ladies were crammed into the first four rows – this was getting bizarre!

The band trooped on, settled down. The M.D. raised his baton and started off the test piece which was quite slow to start. The band were not on their best form and it still didn’t make any sense why all these ladies had dragged themselves in. Was ‘Take That’ or ‘One Direction’ depping for the band?

The test piece started to wind up with a jazzy section and then the conductor started gyrating and twerking like you have never seen. Thankfully it was also a loud part so it drowned out the girly giggles coming from the front. Since then I have seen many conductors doing the Twerk and maybe there should be an award for this added entertainment!

Typically unassuming and quiet in the band room but come vividly to life on stage. Waits at side of stage for the band to be seated then adds at least 30 seconds for ‘arrogantly assumed’ audience anticipation (making the band more nervous). Struts on in New Orleans Jazz Band style and bows so low to the audience that they nearly have splinters in their forehead.

After a quick 1800 they are immediately down-beating into the test piece – band ready or not! Manic gestures throughout – bringing in imaginary parts and flailing arms and hands for dynamics that don’t exist. When it’s over they turn and bow repeatedly (without acknowledging the band) walk off and return for an assumed encore.

Fairly easy going in the band room often doesn’t prepare the band sufficiently. Once on the stage the realisation of their own shortcomings sets in and they become a nightmare trying to conduct every single instrument at once.

Moving from one section to another – in everyone’s face and worst of all talking throughout the performance ‘guiding’ and cursing loud enough to be heard in the box. They are a players nightmare often leaving them shell shocked and coved in sweat and spit after the performance! 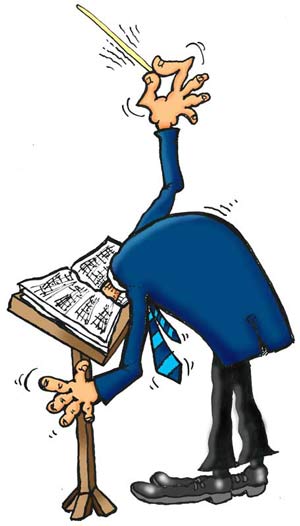 Love the sound of their own voice in rehearsal and very little work is done. Underprepared score study and as a result there is absolutely no interaction between conductor and band on stage because the M.D. has their head wedged into the score. They don’t look up. They don’t bring any one in. They don’t give any indication of dynamics as they are totally engrossed in not losing their way in the score. You may as well replace them with a metronome that can bow!

Players get nerves and so do conductors. Some get it so bad that it makes them shake like a Skegness streaker and lose all co-ordination between brain and baton. In the band room they can be as steady as rocks but on stage they are Harrisons Nightmare – a metronome with a cog or two missing. The band have to soldier on, guessing which arm altitude is the down beat. 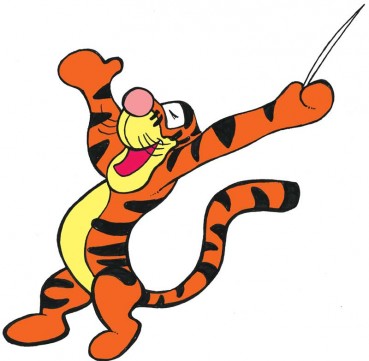 Very static in the band room often slouched on a high stool. On the stage they have a spring in their step, leg, backside…in fact in every part of their body and leap around the stage causing havoc. Good to watch but terrifying for the players who wrestle to keep their parts on stand as the stage makes its seismic shift with the baton wielding lunatic.

Similar to the ‘where’s the beat…beat’ but they do have a sense of rhythm but decide not to share the beat with the band by making circular movements with their arms that no one except themselves can tell where the up-beat is. This can sometimes result in a blurred and slightly tilted performance

From the audience they look like they are not doing anything at all. From the bands eye view they look as if they are knitting a pair of new born’s booties. It’s hard to see anything and bands with a minimalist in the middle tend to follow the section leaders and not the M.D.

This is more of an add-on to some of the other types of conductor. It’s the ones you love to hate when you are in the wings waiting to go on next.

They milk the applause to such an extent that the audience feel compelled to keep clapping out of sheer embarrassment. First they bow, then they get every player and section up to be applauded. Then they go off stage while the band cringe. Then the milker comes back on for the encore and stands with arm out and applauds the band again. Pulls the soloists out to the front…it goes on and on. I have even seen a milker ask a member of the audience to stand (possibly a committee member).

A milker is good when it is an exceptional performance but generally it is used in the hope it will influence the adjudicators but is as transparent as the performance they have just given!

Most conductors are fairly expressionless on stage but the Gurner is a specialist that uses every ounce of their being to convey what they want on stage. 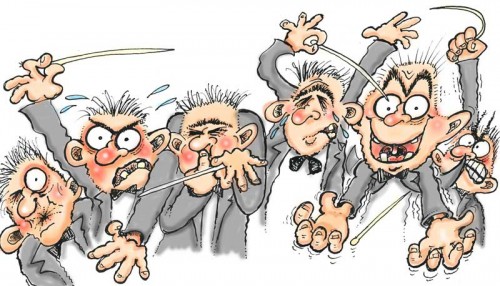