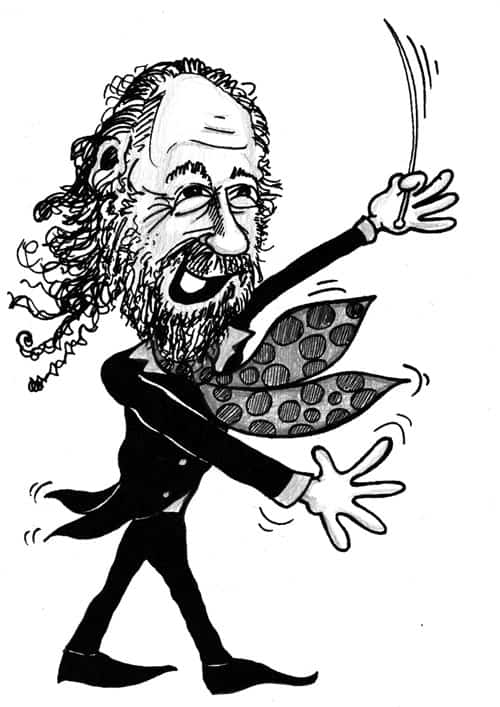 Richard Evans has always been someone who puts a smile on my face and it was a delight to be asked by ‘Dick the Stick’ to illustrate his latest book ‘Richard Evans – Still beating’.  The book charts his personal and banding life in Richards inimitable way with an immense dose of humour.

My first direct encounter with Dickie Evans was at the British Open in 1994 when I was stood next to him as they read the results in the Free Trade Hall Manchester.

At that time he was conducting the BNFL Leyland Band and John McCabes Salamander was the test.  As the results were announced…Britannia Building Society 6th, Yorkshire Imps 5th and Marple 4th I could see him getting more excited…Grimethorpe 3rd…he was even more animated.  As Black Dyke was announced as second, he whispered under his breath “Bugger me (or words to that effect!!!), I think we’ve only gone and done it!” and when they announced BNFL Leyland in first place he was gone like Eusain bolt.

At that point, I thought – ‘This blokes as mad as a mongoose!’ – funny what they say about first impressions!

Over the years I got know him better as our paths crossed at  in the band room, at band contests and through other cartoony encounters. Since then I realised that my first impression was wrong – he looks nothing like a mongoose!

But he does definitely have a mad sense of humour which besides his musical talents, both as a player and conductor has made him one of the stand out conductors of all times – colourful, flamboyant and guaranteed to make an audience smile.

I still laugh when he spoke at the 1996 European finals at the Grieg Hall Bergen, just before the results.  I was expecting a serious monologue about the occasion – No chance with Richard – he stood and told a yarn come joke about a weirdo who knocked someones door at midnight to be pushed on a swing (don’t ask)! – only he could get away with a joke like that at such an occasion…and it brought the house down!

Richard asked me to illustrate the book  a couple of years ago – yes it has taken a while mainly because he is permanently on the go conducting across the globe.

The brief was simple – to illustrate the book with as few or as many of my cartoons as I liked which couldn’t have been more perfect for me.  The first task was to read the manuscript that Eunice (Richard’s brilliant secretary) had typed up and e-mailed.

As I started to immerse myself in the first few chapters I soon realised that this was the wrong approach. I wasn’t there to proofread or edit the script.  I was there to illustrate, and reading the whole book then going back to the beginning would be a waste of valuable ‘pen in hand’ time particularly with over 300 pages of manuscript to negotiate.

What is really interesting about Richards life story is how it has taken him to so many far-flung destinations all over the globe.  There are not many 85-year-olds who clock up the mileage that Richard does, conducting brass bands in Japan, Europe and Australia on an ongoing and regular basis.

The Queen will be hard pushed to find out where he is on planet earth to send him his telegram!!!  It is also a wealth of information on those bygone days of banding with first-hand recollections of the ‘Golden Age’ of banding just after the war into the 1960’s – totally absorbing and fascinating.

I have illustrated several books before but these were for children’s books so I had to consider a different approach.  I needed to come up with a method that looked great, was in harmony with Richards writing style and above all complimented the storyline and his great sense of humour.  Thankfully, after sending him a preview of some cartoons, he gave me the thumbs up and I breathed a huge sigh of relief (cartoonist’s self-doubt syndrome!).

I steadily worked my way through the chapters and it wasn’t difficult to spot points in the text where a cartoon illustration would fit.  Richard writes beautifully with sharp wit, which easily sparked my imagination to come up with complimentary cartoons. I could probably have drawn five times as many cartoons as I  sniggered, guffawed and laughed out loud at many of his banding memories.

The book is now published and if you are at the Spring Festival this year at Blackpool – Richard will be there.  It’s your chance to buy the book and have ‘Dick the Stick’ sign it for you.  It covers a huge chunk of banding history which, when combined with Richard’s wonderful sense of humour, makes it a fabulously enjoyable read!

You can also order the book  Richard Evans Still Beating via this email   – eunicebandfriends@hotmail.com 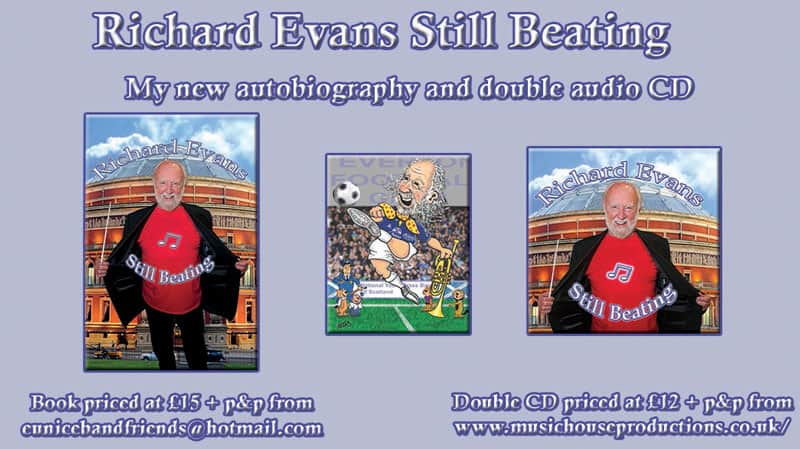