I was delighted to find Jeffrey Curnow on Facebook as he is a fellow brass player, cartoonist and a wiz’ with graphics software.  It was the cartooning that grabbed my attention as I haven’t seen many musicians who also publish cartoons.  It was a no brainer – I had to find out more about this multitalented musician from over the pond in Phiadelphia.

Jeffrey Curnow is the associate principal trumpet of the Philadelphia Orchestra, a position he took up in late 2001 after a six years  as pricipal Trumpet with the Dallas Symphony Orchestra.

His other musical accomplishments are very impressive.  He was a member of the internationionally renowned Empire Brass Quintet  recording 15 CD’s with appearnaces on the Today Show, Good Morning America, Japan Television and  BBC Radio and Television.

He is currently a member of the National Brass Ensemble who have performed at many  prestigious venues and have produced  brass recordings at the highest level.

When Jeffrey has not got his ‘trumpet to lip’ you can also find him in his other roles as educator, clinician, adjudicator, arranger and producer.

After seeing what he does in his many musical roles I wondered where on earth does he find time to be such a fine cartoonist?  Drawing can be extremely time consuming with thinking time to come up with the idea, preliminary sketches and the actual drawing eating up minutes, sometimes hours.  Perhaps its during all those bars rest while rehearsing with the orchestra that he finds the time!!!

I really admire his style of art with minimal line and great sense of humour which I am sure will really appeal to everyone, particularly musicians. 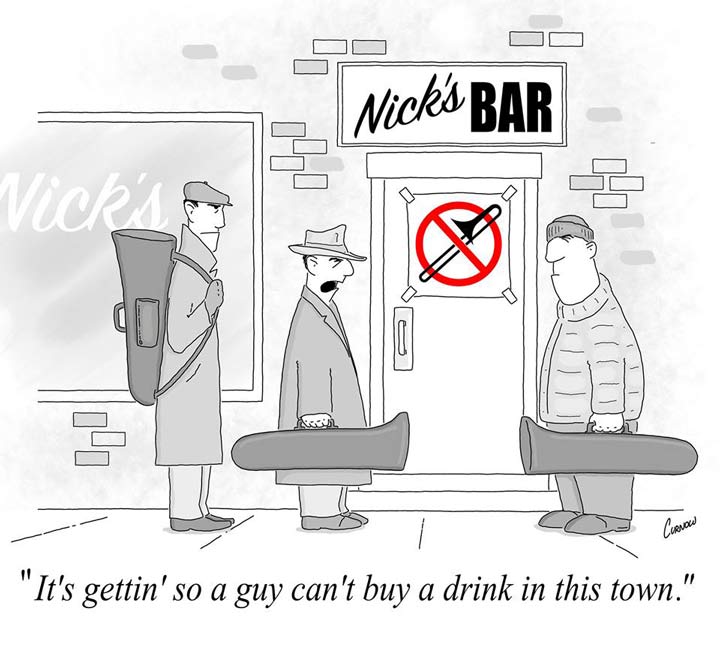 Jeffrey took time out of his busy schedule to talk to me about his cartooning career.

When did you first start creating cartoons and is this talent found elsewhere in your family?

I’ve been cartooning for as long as I can remember.  One early memory I have is sitting in front of the T.V. watching the Beatles animated series and being fascinated by how accurate the caricatures of the Beatles were with seemingly simple lines.  I’m still fascinated with a great caricature.  I had a couple of cousins who were into cartooning.  We’d get together on weekends and write stories and create comics.

What is your medium of preference to create your cartoons?

I create everything, from start to finish on my Mac laptop, using a Wacom tablet.  I do 90% of the work in Sketchbook pro and the text in Adobe Illustrator.  I’ll make final adjustments in Photoshop.

Which cartoonists/artists inspire you the most or have been an influence on your artistic work? 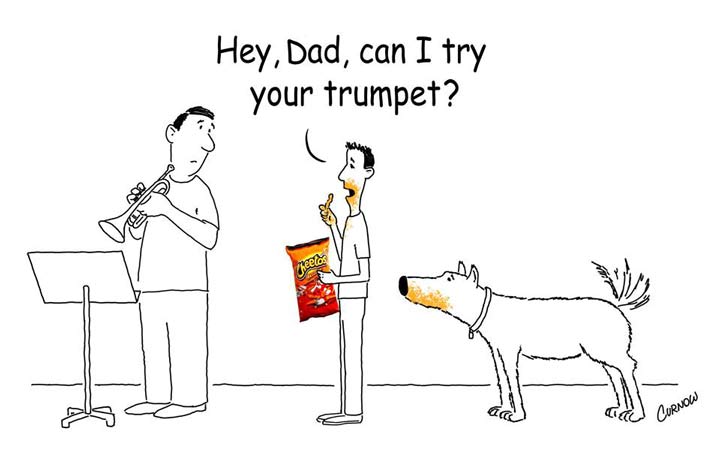 Where do you get the ideas from for your cartoons?

I don’t know.  Sometimes it will be it’ll be a conversation that sparkes a cartoon idea and other times It’ll seemingly just drop out out of the sky.  I know that if I deliberately try to think of a cartoon idea, it’s usually not that funny.  I do think that cartoon ideas are floating around us all the time and it’s just a matter of being able to see them.  The more I cartoon the better I am at being able to see the funny material.

If you had only one choice for a career – music or cartooning?

Right now I would have to say music.  However, I’m finding that the older I get the harder it is to play the trumpet.  Charles Barsotti (another influence) was drawing brilliant cartoons at the age of 80.  check with me in 10 years, I may have changed my opinion on the subject.

You play at the highest level and have had a great career in music – is it easy to find cartoon ideas from your musical experiences and colleagues?

Just about all my cartoons come from my musical experiences and colleagues, arguably to a fault.  I keep trying to find cartoon ideas from other walks of life but then great material from a concert or a rehearsal falls into my lap and I end up with another cartoon about the music biz.

I was recently in Chicago playing a concert with the National brass Ensemble to promote the release of our Gabrielli CD (sorry, shameless plug) and this cartoon came to me. 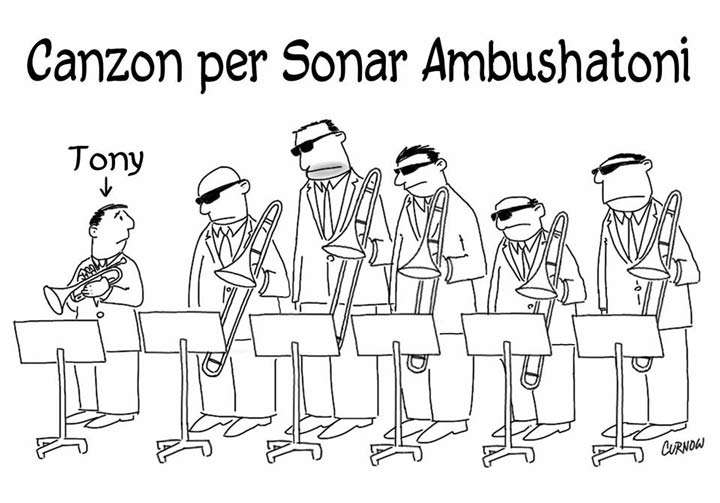 Is there a commercial aspect to your cartoon work or is it just for the sheer fun of it?

I was just having fun for a while, using cartooning as a relaxing outlet for myself, a hobby.  My fear was that if I started trying to find a way to make money at it, I would have to compromise the artwork and content.  Now I am more interested in the commercial side of cartooning, how to establish a recognizable style to my artwork and maybe make some money at it.  I just don’t want to lose the fun I am having with this art form.

Have you ever taken on a drawing that has given you nightmares to produce?

There are some cartoons that I end up spending hours of time editing.  I’ll get completely finished and then decide that the joke isn’t supported by the artwork, or the delivery of the joke is all wrong or, worse yet, the entire premise of the cartoon isn’t as funny as I originally thought.  I’ll either start all over again or be left with just the artwork and no joke.

That’s when cartooning can get tedious.  I’ll end up putting the cartoon aside and wait till a joke happens to come along that goes with it.  It’s kind of like my own New Yorker Caption Contest.

Sometimes a particular person I’m trying to caricature can give me trouble.  I’ll spend hours trying to get a cartoon likeness, think I have it, only to look at the next day and realize it’s nowhere near what the person looks like.

Have you had cartoons published?

I’ve had editorial cartoons published in the newspaper, cartoonspublished on the web and in the International Trumpet Guild Quarterly

Have you a web site for your artwork?

Not at the moment.  Right now I’m having a hard enough time keeping up with my e-mail accounts.  My Facebook page is where I presently post my cartoons, mostly, but an official site for my cartoons is probably in the near future. 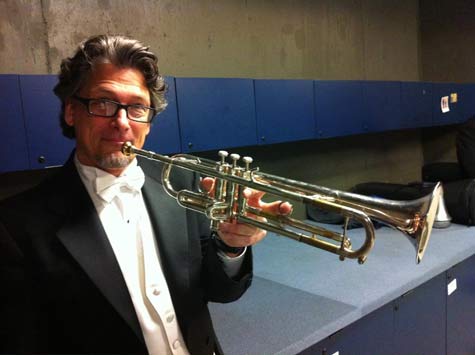 I have a pretty good imagination but I can’t imagine being offered a job as a cartoonist for a major US newspaper.  This seems to be a practice of the past.

I would however like, like to get a cartoon in the New Yorker.  To me that’s like winning the Academy Award for best picture.  Here’s hoping that Robert Mankoff is looking for a good trumpet cartoon!

Owen Farr is one of the worlds leading exponents of the tenor horn.  listen to Nezzyonbrass Podcast 6 as Owen discusses his incredible rise to the very top of brass banding and his mission to promote the tenor horn in the musical world.