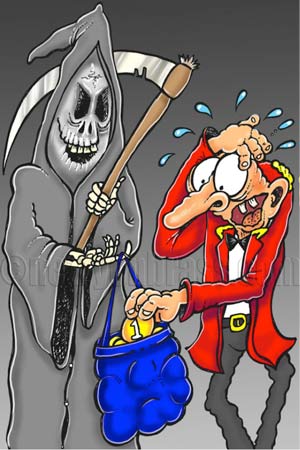 What could be the biggest accolade in a band’s history?  To get to a major final for the first time; a wonderful achievement.  From the announcement of the Area or the Grand Shield, it’s one long rollercoaster of anticipation and sheer joy; the chance to get in with the big boys and beat the best in the land.

This adrenaline fuelled, once in a lifetime experience lasts until the draw of the final …‘Band number six…are drawn number one’ barks the monotone official .  There is a cumulative sigh of relief in the room, apart from one individual – the representative of band six who goes quiet, then red with embarrassment, then immediately turns a nasty shade of ivory as the aftermath of pulling this gem out of the bag is realised.

The worst news possible is then reluctantly relayed back to the bus/hotel and the band goes from high octane anticipation to instant ‘no octane’ deflation – a band on Death Row.

The recriminations are immediate. ‘Why did we send that idiot to the draw?’…’we haven’t been drawn higher than third for years…he’s a jinx!’… ‘we’re cursed!’…’what’s the point?’…etc. etc. until the conductor steps in with the most unconvincing pep talk ever. ‘Bands have won off number one before. Just put it behind you and move on.  We have a contest to win ladies and gentlemen. You have put the hard work in.  We can do it.  Together we can make this happen…let’s do it!’

Bands have won off the dreaded first spot, but that was yonks ago in another contest altogether (was it the Latvian Open or the Uzbekistan National of 1903? – I can’t quite recall).  Who is the conductor trying to kid?!!!

The next disaster looms…’Have we got the music for the ‘Queen’?’  If the answer is no, all hell breaks loose.  More recriminations erupt, especially if the person who forgot the ‘Queen’ also went to the draw.  If the answer is yes, the musical director tells you that this is good as it will calm the nerves, settle the band and in any case, is not taken into account by the adjudicators!………LIAR!!!

Only the week before, the very same person said how vitally important it is to make that initial statement…’First impressions count…without question.’  Nerves kick in with past memories of a rocking queen, ‘Splat her victorious, splitty and glorious’, and that unforgettable drum roll with one stick.  It’s the first band that the adjudicators will hear.  The first of twenty performances. The band that sets the scene; sets the stall out, complete with twitching Queen introduced by a gammy beaked woodpecker.  You’re damn right, first impressions count! 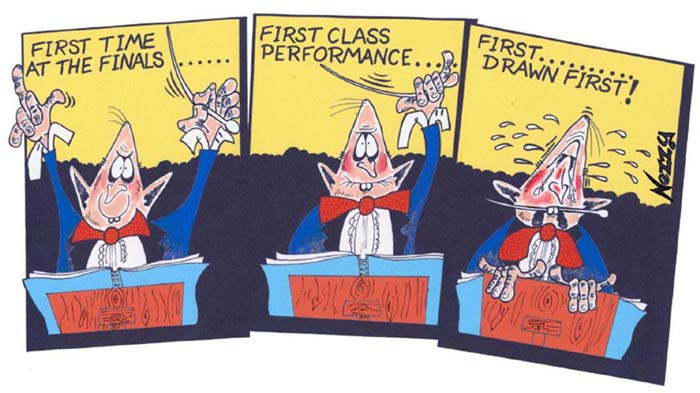 So why is a number one draw so bad?  There are all sorts of theories but one prevailing and undeniable statistic exists – in larger contests such as the British Open and The British National, bands just don’t win off the number one spot and seldom, if ever, make the frame.  This is a hard fact of contesting life – it has to be an exceptional out of body experience in the adjudicator’s mind to be able to carry through the day’s offerings to end up at the top of the pile.

It’s a weird art that is judged on technical merit, interpretation, quality of performance and overridden by personal opinion.  One person’s steak is another’s ‘scrag end’ but even the juiciest sirloin doesn’t chew well after twenty or so bands.   It’s virtually impossible to recall each of the twenty performances as the ears do not have the benefit of action replay, Sky Plus or Wimbledon’s  ‘Hawkeye’.

Do the maths – twenty bands at fifteen minutes per testpiece  =  five hours of music +  changeovers  + comfort break.  At the end of the contest, number one band is a fleeting memory.  I have come off stage at the Albert Hall unable to recall our own performance, let alone another 19 bands!

There are some bands that seem to always get the perfect draw…that never ever (EVER!) have a number one draw.  How is this possible? The answer is simple.  They are either exceptionally lucky or there is a supernatural influence coming into play.  The great banding gods of past success show them favour to keep the best bands in with the best chance of winning.

So why do some bands always seem to get the worst draws?  The opposite reasons – either unlucky, or the good and great in the sky are keeping them trodden underfoot (and have a macabre sense of humour wanting an original version of the National Anthem!). One of these theories must be correct.

There are advantages to an early draw as the band gets it over and done with quickly and still have the pre-breakfast rehearsal firmly in their minds.  Even more important (if you are of the thirstier persuasion), it gets you the best seat in the pub and well before opening time.

The downside however is like Dante’s Inferno with several layers of hell to traverse before shaking hands with the devil (or in this case a member of the winning band).  You have the privilege of being able to listen to nearly every other band who will probably beat you and lower your expectation to gutter level.

A potential eight-plus hours in the pub, which at a modest one or two pints per hour equates to a hangover (at the very least) by the time of the results.  The pub offers a one-way trip to becoming morose and suicidal and can completely empty your bank balance with unjustifiable bar prices.

After the results, the real results begin (‘lager autopsy’) where the early drawers congratulate the winners with false smiles, half hearted back slaps (that wished there was a knife present) and shake them warmly by the throat.  They argue they were ‘robbed’ even though not so much as a demi-semi quaver from any other competing band has passed their ears. 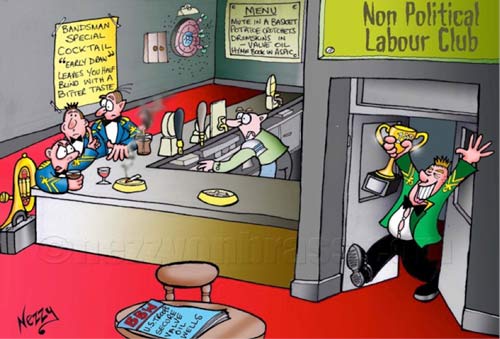 “I know we were drawn first and haven’t heard another band all day but I still say we were robbed!”

So is there anything worse than a number one draw?  Well, apart from the horrific mix of emotions of coming third in the Grand Shield, or being bumper-up when the principal cornet is sick two minutes before taking the stage on Harmony Music –  the answer is a resounding NO!

One day, this long standing tradition will be broken just as Andy Murray proved it could be done in the world of British Tennis.  ‘And the winner of the British Open is the band that played…number one!’ will be heard at some point in the future…perhaps!