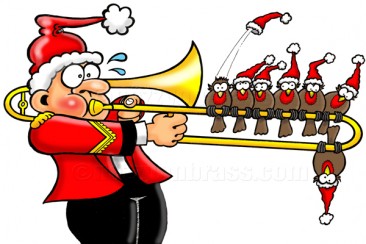 Brass band Christmas carolling – not for the faint hearted

‘Twas in the winter of 1969 when I experienced my first Christmas banding job.  Wigston Temperance Band were out every Christmas and carolled around the streets of deepest Leicestershire come rain, snow, flood or permafrost.

On this occasion it was the latter and I was woefully underdressed for my first Captain Oats experience, wearing a flimsy shirt, jacket and school shorts.  By the time we reached the third verse of ‘Good King Wenceslas’ I was deep and crisp and even – cooler than an Eskimo’s hooter!

A morbid blue pallor filled my face and it was only when one of the cornet section noticed that I was lying in the snow trying to go to sleep, that my trombonist father (oblivious to my hypothermic status) was advised to take me home immediately.

I moved to South Wales in ’73 and a few years later bought my own clothes which included basic necessities such as long trousers, and was now at an age where I was able to identify the early signs of frostbite.

Ebbw Vale in the South Wales Valleys is located 1,650 feet above sea level – on the ‘tree line’, where I have known it to snow in May and was often plagued by Caribou going through the bins!  The then Ebbw Vale Municipal Band led me to believe that carolling would be ‘tidings of comfort and joy’ and ‘goodwill to all men’.

I was assured that the whole band would be out in force, sticking together, pulling in the same direction…as one!  Have you noticed how bands always paint a rosy picture just before you join?  Like a rose, there are thorny realities not far away.

At the mention of Christmas Carols and collection tins, players suddenly fall into distinct categories,  with four types of banding carollers:

Family conflict always rears its ugly head as players who have been daft enough to enter a relationship with a non-brass bander (‘buggle’), or lord forbid, even marry outside the brass band cult, are given hell on earth as Christmas approaches.  Why ‘buggles’ can’t simply accept that you need to play carols outside the local megastore for 12 weekends solid before Christmas, and go carolling every night up to the 25th (including Christmas Eve)  beats me!!!

Let’s re-visit the poor collector.  You have to be a special type of masochist to effectively beg, take abuse, be groped in pubs and clubs and mauled by the occasional pit-bull. 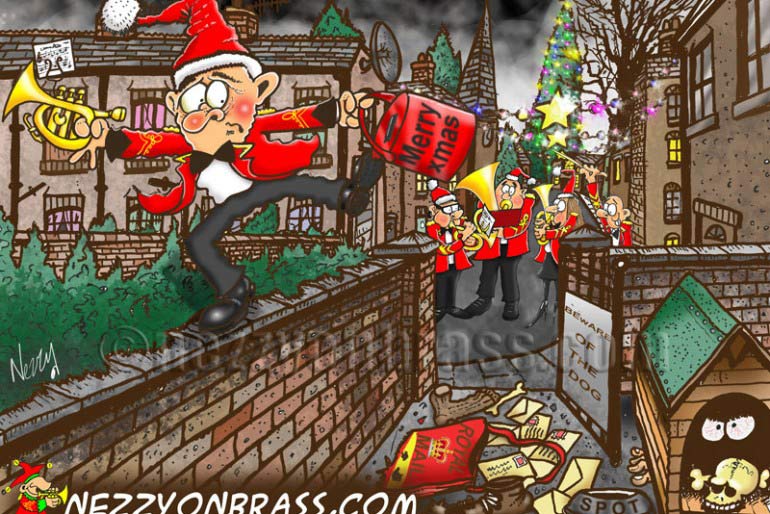 It’s no good putting ‘Timid Toad’ in charge of the collection tin.  You need someone with a 5 star cringe factor.  Someone so over-friendly, cheesy, overbearing, dominating, persuasive and persistent (almost to the point of pick-pocketing), that punters will willingly hand over their wages.  Either that or you find a Barbie and Ken that can charm open wallets and purses.

Then there is also the rival band…oh yes, the worst possible scenario.  I have seen it with my own eyes.  The prize was the local Workmen’s Club which would be packed with merry-makers on Christmas Eve and was by far the most lucrative venue for miles.  I can see it now – the Town Band approaching 100 meters from the south:  The Salvation Army Band the same distance from the north. Eyes were locked in healthy respect for a fleeting moment then… the race was on to get to the front door first.

The Salvation Army won hands down being leaner, fitter and not affected by any illegal substance.  They reached the main entrance in a time that would have kicked Usain Bolt off the podium.  It was a lesson in sheer agile temperance and they were deservedly rewarded. 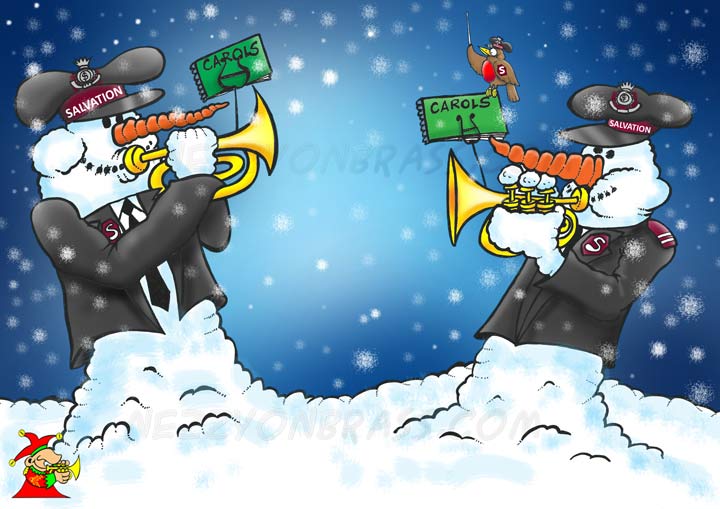 “Every time I try to warm up my lip goes!”

Out of the freezer into the fire!

My favourite venue was the local hospital as they really appreciated some Christmas cheer and it gave the collectors a rest from being abused and mauled.  The only downside was moving from the outside (polar) to the interior of the hospital (950 in the shade).  OK for five minutes, but after that, even the valves begin to sweat.

Just to make it fun, a nurse or ambulant patient, (preferably unattached to a life support machine or bags of bodily fluids), would have a go at conducting the band.  Bearing in mind that most of the band were short of sight, short of breath, or full of shorts. Silent Night with its beautiful soul moving melody always transcended into a zoo on fire.

When the carols overdose

After hours of carols with lips hanging off and festive nausea setting in, the clever dick of the band starts messing about.  Triple-tonguing ‘We Three Kings’, ‘Good King Wenceslas’ and other pyrotechnic baubles is an age-old carolling sport of the resident band plonker.  Adding in a descant is another of their unwelcome skills.

Swapping instruments and changing places with the conductor (if you are lucky enough to have one) is when you really know it’s time to either chastise or pack up. Trying to play Jingle Bells at vivo splatissimo always appears at some stage, which really gets the old stalwarts snarling and snorting. 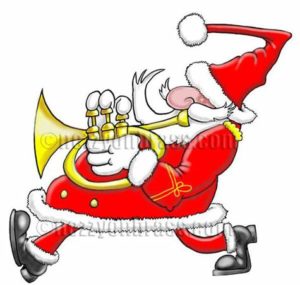 After all the effort, family fall outs missed parties and frostbitten evenings, it’s all been worth it.  Another chunk of funds to keep the band’s brass snout above the bailiff’s pond – keeping the spectre of bankruptcy away from the treasurer’s bedroom on Christmas Eve.  Whether you love it or loathe carolling, it sets you up for Christmas in a way that ‘buggles’ will never know!