Why do you play your brass instrument? 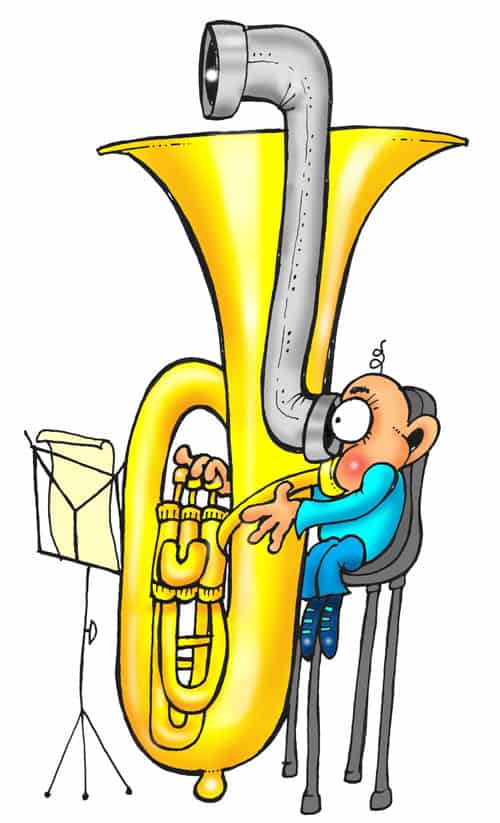 “A gentleman is someone who knows how to play the baritone and doesn’t” Mark Twain.

Why did you end up on the brass instrument you play in your band? Was it by chance or, as a kid, did you deliberately seek out your musical destiny on a baritone, bass, or bongo?

When I first began playing it was the old, toothless, and less nimble-fingered who played Bb bass, the traction engine of the band. Let’s be fair, you wouldn’t expect a two-and-a-half foot child to tackle seven miles of piping with a periscope to see the conductor. But there are youngsters who do brave this brass leviathan. It’s as manageable as a dead horse and an absolute nightmare to get in and out of a car.

Why would anyone want to spend a banding career as a beast of burden with an intermittent slipped disc? The answer lies in the dots on the music stand. The engine room of the band is an easy life with long notes, a touch of wind and, an avoidance of semi-quavers.

Moving swiftly on to the trombones, the weirdest instruments in the band. Simple to operate, you move your right hand back and forth with no valves to worry about. As long as your right arm is roughly in the right place, give or take six inches – hey presto you can play the trombone.

Skipping forward a row we find the euphonium and you can see why demand is great for this prime position. The euph’ repertoire has some of the best melodies, fabulous virtuoso solos, majestic parts in test pieces and opportunities for a career as a soloist. Hell, you could even progress from the euphonium to reach the dizzy heights as the editor of Brass Band World Magazine!

Then the baritone… hmm…

Moving on to the horn. I have sat next to some brilliant horn players in my time and they all have the same weird attribute – self-hypnosis. Watch any solo horn player closely. They are in a constant trance. A truly great brass instrument for any kid to learn that lives life with a thousand-yard stare.

Ten cornets in a brass band, and usually the brass instrument of choice for kids. Easy to handle for even the smallest shrimp, the cornet is the instrument most players start out on. If they stick to it, what can they expect? Most aspire to the end seat, but few make it. The very brave will risk life and limb on soprano. If a band was a circus, the soprano would be the person balancing on a bicycle on the high wire. Sopranos love a trick cyclist (or is it a psychiatrist?)

The powerhouse of the cornets are the back row seconds and thirds. No, you don’t often get the tune. Yes, some of the parts are as technical as the front row, but you are in a decent range, just perfect to let it rip and blow the eardrums of the front row to shreds.

Last but not least are the shed builders. Percussionists… a special breed with a disturbing passion. If they weren’t in a brass band, they would be in prison as the urge to hit, beat and slap is irresistible.

Back to the shadowy character on baritone. It is alleged that this person inspired Bram Stoker and Mary Shelley. A person that only practices during a full moon – BEWARE!