If you went to the Blackpool Brass Band Spring Festival back in May didn’t time seems to fly? Before you knew it you are back home feeling like you have been run over by a thousand stampeding wildebeest.  So what exactly happened?  Where did that time go?….Here’s a quick reminder… 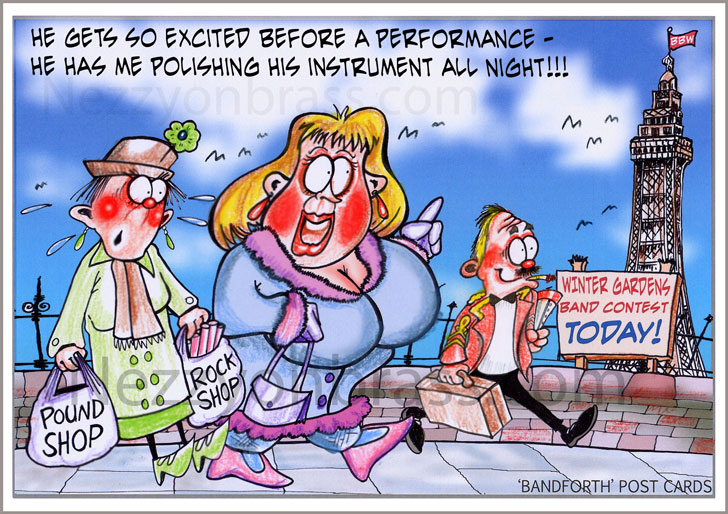 Two days away from home.  48 hours for a single contest.  Ten hours on the bus on the way there and better progress on the way back say 6 hours with a stop for the Tacho’. That’s 14 hours of sheer hell, sat smouldering on a sweaty coach in close confinement with players that you never talk to.  Committee members that you never want to talk to and supporters that you have never seen before.  14 hours of Bingo, quizzes, a video that no-one can hear and the sweet smell of the bus’s chamber of horrors slowly fermenting.

The choice of seat is crucial.  Sit at the back and you won’t get a seconds peace with all the over-excited delinquents – the younger element, students and a fair sprinkling of numpties.  At the front is God’s waiting room.  Committee members who have been there since the band room was officially opened by Drake Rimmer. You know the ones…They can recall every performance in the Free Trade Hall and even watched the Crystal Palace burn to the ground.  Eyes full of rose coloured test piece performances.  Recollections of past players who will never be bettered.  Bands without a borrowed players (and that was a long time ago!).  After 30 minutes all is quiet at the front save some toe-curling snores and the odd top set of gnashers plopping onto the laps of the slumbering undead.

The centre of the bus is the best place to be but even there the choice of seat is crucial.  Sit directly behind ‘trap 1’ and every time someone visits the smallest room on the bus you get the full blast – Eau de colon – like peeling onions but with a slightly different bouquet.  Pick the right seat in the middle and you have moderation and relative peace.  As the gridlocked motorway brings progress to a standstill phone calls flash between band manager and reconnaissance scout party to make sure the allotted rehearsal room is kept available even if the hotel says NO! after 8 pm.

The bus belches into the holy grail of the spring banding equinox and the stench of candy floss, last seasons chip fat and a suspicious hint of sea and donkey come wafting through the bus.  It’s that unmistakable whiff of Blackpool!

The bus nearly tips over as the newbies spot the Eiffel Tower of the north move en-mass to one side with iPhones at the ready. The old lags start to stir, take a quick swig of embalming fluid to jump-start their ancient bones.

The band manager leaps off the bus and races into the hotel to return with a spaghetti of keys befitting the warden of Wormwood Scrubs.  No such thing as swipe cards in this £40 a night and all you can’t digest for breakfast.  The landlady appears at the door filling it with eyebrows and a moustache to match.  Arms crossed and tattooed with her regiment, she surveys the members of the band.  Everyone greeted with a smile of ultraviolet teeth and a glint of murder.

Bags thrown into rooms.  Straight into rehearsal and in the stifling heat of the basement the conductor tries to polish the piece. Unfortunately, in some cases, you can’t polish a turd but as one illustrious conductor informed me recently you can roll a turd in glitter!

For the Grand Shield this year it would take more than the Queens Own Hussars to bull up The Triumph of Time to even a matt finish. A fiendish choice in weird acoustics with an audience remote in the huge cavernous black hole of the auditorium.  Add one of the most difficult band tests ever written and its a car crash for many. I take my hat off to any band that was involved in the grand shield this year.

It was a stern test for the elite bands when the piece was chosen for the Open in 2016 but for the Grand Shield, it was something else.  I sat in on a few rehearsals, with a  couple of competing bands and I have never seen anything so difficult. When I first looked at the Flugel part here were sections in it that looked rock hard and then the killer…the tempo.  It would take several of Star Treks Dilithium Crystals down the bell end to even get close!

In the Senior Trophy, it was G. Baily’s Dieadum of Gold which has every soprano player screaming for their mother. This is the hall where the audience is literally sat on your lap and is as scary as hell – where the onlookers in the front row can read your parts they are that close.  Watching you blag your way through.  Seeing every ‘Pritsticked’ piece of manuscript, every pencil mark, in fact, every sneaky trick the conductor has asked you to put on your part.  Don’t split a note, don’t shake and don’t even sweat because that bloke whose breath you can feel on your ear to the audience is watching like a praying mantis.

Down in the bargain basement of the Senior Cup, it was Eric Balls Kensington Concerto with one of the easiest (HAHA!) cornet solos you will ever get in the top section.  Only it’s right at the beginning…and just to add a tad’ of pressure the solo cornet is as stated…solo! On your tod…with everyone and their cat listening for the first split note…in a room under renovation, resembling a building site, full of scaffolding poles creating an echo chamber within a ‘web of steel’.  No pressure there then!  The worst bit is that it sets the band up.  Split a few on the opening solo and it can be the most uncomfortable ten minutes of your life. It was you who had made the first impression in the adjudicator’s ears!

At least there is a pre-draw of sorts meaning you already know if you are in the first or second half. Second half means a lie in and a newspaper to be read.  A leisurely breakfast, stroll on the prom’ and perhaps even elevenses with a cream bun.

The first half of the draw means up at dawns crack with eyes that won’t or can’t open. Breakfast that you can’t face and a lip that won’t work.  It also means an additional 5 hours in the bar, a hangover by seven at the very latest and unconscious by nine. You will probably be asleep for 11 hours and then back on the bus to head home with a head that feels like an axe is sticking out of the back end.

So is there triumph of time in Blackpool?  Between sitting on a bus and sleeping you will only be aware of some of it.  Is it worth the effort of feeling like a rat that had an extra large helping of Warfarin for Sunday lunch?  At the time probably not but after dragging the rosy spectacles from the cupboard and looking back with fondness… and not being able to feel the effects of curried gluttony and alcoholic poisoning…of course it was!!!