Brass band discipline was summed up beautifully while recently interviewing the legendary James Scott he recalled a clock on the band room wall at Munn and Feltons.  Under the clock was a plaque inscribed in large letters ‘Always on time, harmony sublime’. (listen to the podcast interview with James Scott Here here…) 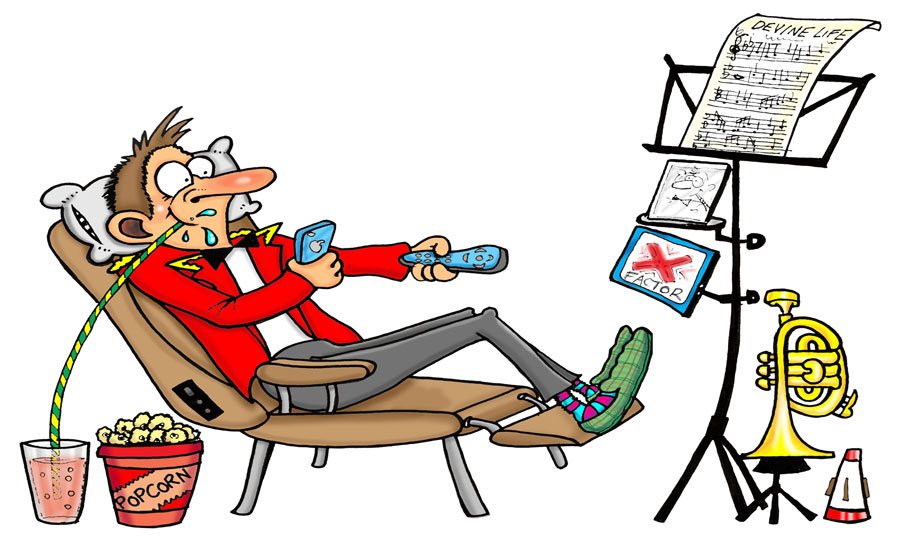 He also said that the only excuse for missing a rehearsal back in that golden era of banding was death!  It may have been a tongue in cheek remark from the great man but full attendance, timekeeping and total respect back in the day was expected…no…demanded. How times have changed! 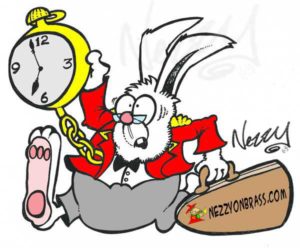 In years gone by if you were going to be late, you felt terrible and it was an art to give a plausible reason.  Sprinting towards the band room like Alice’s white rabbit your mind worked overtime for a cunning and believable excuse.

My best was when my parents owned a shop. “We had shoplifters just as I was leaving for band and I chased them for miles” (True) It was easier when I later joined the fire service ‘ Been putting out a massive blaze sorry’. But in todays carefree times latecomers saunter in with no guilt or  remorse. They miss band for the most paltry reasons ‘My dog was ill’. ‘New shoes were tight’ ‘My mother made dinner late’…WHAT???

Latecomers should be given a fair trial and hung!  Band room discipline has also evolved into something else!

Can you imagine Fred or Harry Mortimer rehearsing one section of the band while many of the others have their hooters buried in mobile phones?

Live sport and  soaps stream onto the music stands and even full blown text conversations with those in and outside the band room.  The worst culprits are those buried at the back…the basses, percussion and lower back row cornets with their sneaky wifi earpieces.  Always asking the conductor ‘Where are we going from’ because they have been so engrossed with Liverpool v ManU or a talking cat on YouTube. The muffled cheer when their team scores a goal – shocking!

Perhaps bands should have screening devices and random strip searches or even a wifi blackout. Cutting their thumbs off would stop the plague of texting. The only reason for a mobile phone in rehearsal is to find out where you are in the draw.

Talking of change for the worst think of uniforms.  Shirts hanging out ties at half mast and some of the most ridiculous footwear ever to grace a cobblers workbench.

Band sergeants used to be respected and feared,  berating players if they couldn’t see their face in their shoes. White socks was a horse whippable offence in the good old days. Even walking onto the stage with your stage jacket with a button missing or undone could result in a roasting in front of the committee.

Equal opportunities, do gooders and people just waiting to be offended has stifled the role of the band sergeant to such a degree that you now have players in trousers of 50 shades of black, socks adorned with the latest Pixar characters and shoes befitting a circus!  What must people think when they observe a band of rag tag and bobtails ‘slummocking’ onto the stage?

I can sympathise to a degree when people have little money to spare for the correct attire.  My mother used to buy my clothes from charity shops and the local Army and Navy surplus store and I was dressed as a U boat commander to the age of 15. But some modern bands folk seem to think fashion is king, wearing hob nail boots on stage is cool or turning up in a shirt that looks like it was ironed with a hammer is perfectly fine.

Finally, there has been the creeping baggage phenomenon on stage.  Designer handbags, man bags and an assortment of fluorescent drinking mugs.  Before long there will be reclining comfy chairs with armrests and cup holders. Stands with a mirror shelves for phones, inter-movement snacks, and makeup.  Floor sockets to keep mobiles charged and did I mention players taking selfies on stage?

Does it really matter what we look like when in the public eye?  Surely it’s all about the music?  Let’s flip the coin…Visualise the band of the Coldstream Guards marching down Horseguards Parade. Can you see their white socks, shirts hanging out, checking their latest text message, some of them wearing brown shoes and a couple running behind because they have overslept?…Never in a million years!