There Was a Brass Bander Who Swallowed a Fly…

The band on stage are ripping through the loud fast and furious section of the test piece as the quiet middle section approaches. 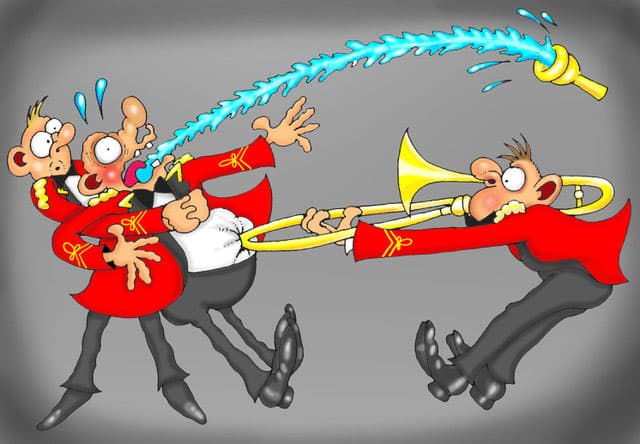 The piece calms down to a mere whispering timp’ roll.  It’s almost silent in the hall as the first of the lyrical cadenzas is about to sing out.  The atmosphere is electric, and everyone is waiting for that stunning entry.

Then someone coughs like a horse in the audience.  You miss hearing the initial entry of the brilliant soloist and then someone else coughs…and another and another.  By the time you have drawn away from the hacking distraction, the timp’ roll is back heralding the next cadenza which starts ppp on a top C.

The soloist picks up the tenor horn and takes a breath.  Someone in the front row of the audience sneezes and another coughs.  A distant door slams and after several more wracking coughs the magic of the moment has gone.

Why do these plague-ridden people go to band contests?  Are they sent there by some band hating gremlin or perhaps they were players that never quite made the grade and are on a mission of revenge?  Whatever their motive they are one of the most annoying parts of any live performance.

Go outside the hall and you won’t hear a cough, sneeze or any other bodily expulsion.  No… they save it for the next pin dropping lento they can bark at! Why? Because they can!

There is one thing even more infuriating. Sitting in the auditorium near some brass band pundit typing away on a laptop has to be the ultimate inconsiderate noise you will ever hear.  I had the misfortune to sit through a major contest while a pundit watched in the loud bits and typed through all the quiet passages. Even with looks that could burn holes through a music stand it just didn’t register with the individual that he was annoying the hell out of everyone trying to listen. Some people just don’t get it do they?

Mobile phones should be confiscated before anyone sets foot inside a contest hall.  There is nothing more annoying than a dark auditorium with a sea of lit-up screens taking the shine off the performance.  Give them a fair trial, I say, and hang them!

Noise and other distractions are not just confined to the auditorium. Announcers! Most are brilliant and do their job immaculately.  Some think they are more important than the band. You are watching the conductor.  Mouthpiece on lips waiting for the first downbeat when the idiot that just announced the band starts talking to a stagehand and shuffling his notes ready for the next performance.

The conductor glares and waits as the announcer decides to go for walk behind the side curtains opening a creaking backstage door and the chatter of the three hundred people outside floods in.  A trap door should be provided for such people for a swift exit.

Then there are the mishaps on stage that can ruin a great performance.  A dropped mute, a cymbal stand with a dicky leg or someone choking on a fly they have breathed in that needs medical assistance or a good thwack between the shoulder blades (seen that twice!).

Sometimes there are spectacular disasters. Soprano players passing out during sustained high notes, the opening of an extremely fizzy bottle of water spraying half the front and back row cornets and players dropping off the stage when a chair leg being moved back an inch or two, settles neatly onto fresh air.

The best had to be a pantomime scene slowly descending during a performance.  There is nothing quite like ‘The Quiet Village’, the calm and serene movement from Devon Fantasy accompanied by a thundering, unfurling backdrop of Jack and the beanstalk!

My all-time favourite performance disturbance was Kensington Concerto on the makeshift stage in a field at Bugle. It was blowing a gale and raining bullets.  The adjudicators’ remarks…’ Letter D all good here…Letter E to G couldn’t hear a thing for the wind…’

Our current zoom band collaborations lack such interjections, thanks to precision editing… but… I would put up with the foghorn of the QE2 or an announcer with a penchant for River dancing if we could get back to live performances!

Banding characters past and present of the quirkier nature! Nezzy in Wonderland – Post Jab Nightmare