All about the bass and the brass band bus!

After a long coach ride to London, rehearsal and a dubious Persian restaurant I camped down for the night ready for the contest. 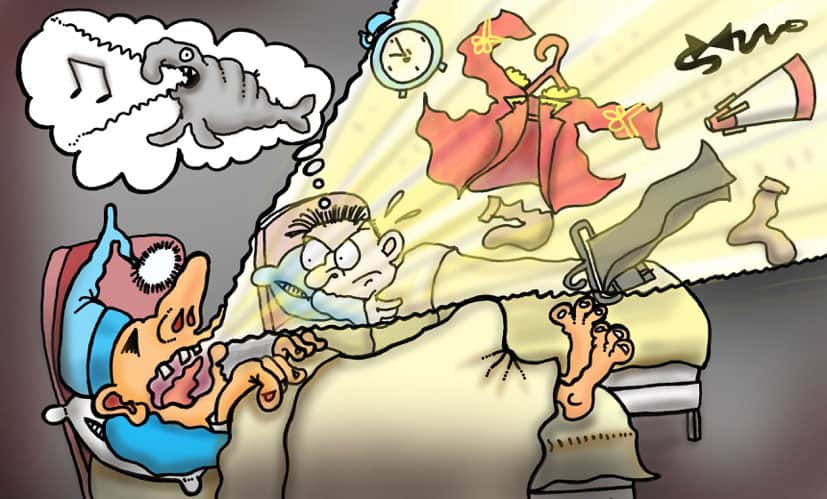 My bass trombone ‘roomie’ announced he was as tired as ten adjudicators and was asleep before you could say Handle in the band.  Just as I entered the land of nod it started with slow wheezing noises (possibly in Ab?).  Barry then stepped up a gear to a very healthy mf.  The opening wheeze morphed into a strange air varie with several percussive grunts followed by prolonged throaty rasps. Triumphantly the crescendo builds into the main theme – an fff cacophony that would have done a rampant elephant seal proud.  It was like sharing a room with a wild animal and needless to say, the next day I sat blearily on the stage of the Royal Albert Hall and had been awake for over 28 hours. Barry, on the other hand, was up like a lark and as fresh as a daisy.

We have all at some time suffered at nasal aerobatics of banding ‘roomies’ but in my experience, the culprits are always associated with the word ‘bass’.  Bass trombone, Eb and Bb Basses and even a certain Bass Drummer who could remove the gloss from a doorframe without the aid of paint stripper.

So how can you get a great night’s kip? You could remove yourself from the noise.  One ex-Cory rep player did just that back in the day when his Bass Trom’ roomie impersonating a chainsaw made him sleep in the en-suite bath.

Lady banders don’t seem to be afflicted by this curse.  Is it possible that there are no feline fog horns?  Perhaps mixed-sex room sharing should be made compulsory for the good of the band!  The best way is to bite the bullet and have your own room without the delights of a volcanic companion.

Sometimes even that doesn’t work.  A few years back in a mangy Blackpool hotel with paper thin walls a well-known Eb bass player managed to evacuate his roomie and those in the bedrooms on either side.  My own solution…I room it alone or take ear plugs!

All about the brass band bus

Thinking of past trips, the seating arrangements on a band coach intrigues me.  There is a definite hierarchy which has its own laws of psychology in the banding world.

The young, rowdy and foul-mouthed element occupy the rear seats and the worst of this bunch commandeer the ‘five-seater’ right at the back hidden from view by a battalion of suit carriers and percussion that cannot be rammed into the bus lockers. This is where the lurid songs originate from on the return leg usually localized at the back but can spread after winning a contest.

You have the band elders and committee members who mumble and doze in gods waiting room at the front. There is also a sprinkling of parents in this area who are too scared to venture too far towards the wildlife at the back.

The mid-section has a disparate array of geeks, freaks, gamers, wannabes, families, couples, sensible, insensible, sweet sharers and the middle-aged.  Coach seating positions run in parallel with your own banding career where you start on the back row and progress to the front.

With this standard arrangement of seating, it is easy to board the coach.  Embarking is a different tale with the ancient and bewildered who have all the time in everybody else’s world – taking forever to wake up, find their teeth and coat before staggering into the aisle.  All this while the young, back seaters froth at the mouth like greyhounds in the trap as the senior banders block the route to their Big Mac frenzy at the service station comfort break.

These are the general rules but there is another factor to consider.  A category that has a roving ticket depending upon the coach toilets location  (if there is one on the coach that works!)  Have you noticed how inhumane coach loos are?  On some, a canary would have been advisable to check the viability of the atmosphere before entering the chamber of horrors!

There are three distinct types in this category.  The poor traveller, the weak of bladder and those with self-imposed bladder problems due to over indulgence.  The latter usually only sit close to the loo on the return trip while the former book a return, ringside seat.

Last but not least is the zombie that wanders up and down the aisle.  You know the one – Billy no mates who likes telling his life story.

So if you want to see where you are in your banding career look at your coach seat!